The National Front wreath at the Cenotaph dishonours all those who fought Hitler, writes James Hallwood. 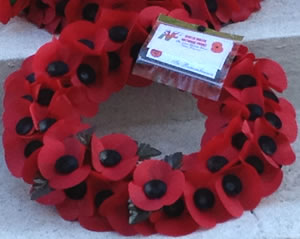 Last Sunday I joined thousands of others at the Cenotaph to remember those who had given their lives for the freedoms we enjoy today.

As in previous years, there were two moments that particularly struck me: the march past of Second World War veterans and the laying of the wreaths from the Commonwealth High Commissioners. Both reminded me of our nation’s fight against Nazism, the tremendous debt we owe to those who fought Hitler and the hugely overlooked and critical contribution of people from across the British Empire who fought and died for a country many of them had never seen.

With this in mind I looked at the wreaths after the service – wreaths from across the globe – and was aghast to see that amongst them was a wreath from the National Front.

To have a neo-Nazi organisation represented in the memorials at the Cenotaph is an insult to those who laid down their lives in the fight against fascism. It must be removed.

Not only is the wreath at odds with Britain’s struggle in the Second World War, it shows blatant ignorance for the enormous debt we owe to millions across the Commonwealth who fought under our flag.

I have long argued the contribution of the non-White forces in both World Wars has been grossly overlooked. Not only were these huge in number but understanding how many fought and died for Britain would do much to show the country that while the National Front’s and other fascists’ ideological sympathies lie with Hitler, non-White troops from across the world were fighting under the Union Flag against him.

In the Second World War, 2.5 million Indians volunteered to fight for Britain, the largest volunteer army in history. They received 4,000 decorations and 38 Victoria Crosses, losing 36,000 men and leaving 34,000 wounded. Seven thousand Caribbean troops and 500,000 Africans fought for us in World War II. We should never forget this.

In the battles of the Great War, 5,000 Nigerians, 2,000 Kenyans, 3,000 Malawians and countless other Africans died for Britain while 2,000 members of the Chinese Labour Corps lie with the British dead in France. The numbers, names and countries go on – countless died for an island so far from home.

If the trenches were Hell for Europeans, imagine the horror, the cold and the suffering of those fighting thousands of miles from their families in an unfamiliar land.

When the first waves of Commonwealth immigration came to the UK, most were from families that in some way or other had helped the British war effort. In light of this, the racism they encountered seems all the more perverse. Their descendants today have every right for their forefathers to be recognised for their valour and sacrifice in service of our country.

How disgusting that the National Front – who advocate repatriation of non-Whites, and maintain links with neo-Nazis who deny the Holocaust – should leave a wreath or organise a day to ‘remember the fallen’ when so many who fell were non-White and Jewish. Their ideological predecessors were interned as traitors while the grandfathers of so many of our Commonwealth cousins and fellow citizens were fighting Hitler.

The wreath laid there is an insult to those of every racial background who died for Great Britain and a disgusting juxtaposition to wreathes that commemorate the millions who made the ultimate sacrifice to defeat Hitler.

This country needs to do so much more to highlight the diverse nature of those who helped Britain in its darkest moment. The British Empire didn’t last for a thousand years but without doubt its finest hour was destroying Nazism. History would surely have unfolded very differently without the enormous contribution of the peoples of the Commonwealth. We owe them so much.

It’s time we reflect this in our schools and representations of the World Wars. But the first thing we can do is remove that wreath and others like it. Together we defeated fascism – seeing its remnants on Remembrance Sunday is an insult to those that died, the Commonwealth, and our diverse nation: A nation built upon the sacrifice of millions from across the globe.

When we say ‘We Will Remember Them’ let us ensure we do everything we can to remember all of them.

Update: The Royal British Legion have been in touch to say they had no connection with the National Front laying a wreath. After the official ceremony people and groups are at liberty to place their own wreath – it’s just a pity the National Front took the opportunity to try and hijack such an important occasion

21 Responses to “Comment: The National Front wreath at the Cenotaph dishonours all those who fought Hitler”