Writing in The Times yesterday (£), Nigel Farage claimed that if Margaret Thatcher was still leader of the Conservative Party there would be no need for Ukip. More specifically he said: “Had she still been in power in 1992, there would have been a referendum on [the Maastricht] treaty, and the need for UKIP would probably never have arisen.” 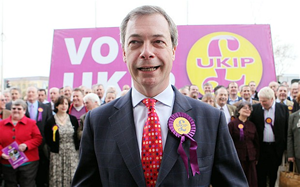 Writing in The Times yesterday (£), Nigel Farage claimed that if Margaret Thatcher was still leader of the Conservative Party there would be no need for Ukip. More specifically he said: “Had she still been in power in 1992, there would have been a referendum on [the Maastricht] treaty, and the need for UKIP would probably never have arisen.”

This would be the case, in contrast to how she described herself, because Thatcher was for turning. As Farage writes, in the 60s and 70s Thatcher was very pro-Europe and dismissed the loss of sovereignty, “mak[ing] her sound like Peter Mandelson today”.

In 1975 she campaigned for a “Yes” vote for Britain to stay in but later changed tack, upsetting many of her colleagues who continued to fight for integration.

But would Thatcher have been for Ukip? What Farage is trying to do, in writing this piece and saying that he is the “only politician keeping Thatcherism alive”, is to justify the split in the right by calling Cameron out for his inactivity in getting Britain out of the EU (or rather getting the EU off of Britain’s back).

Since Thatcher’s death Farage has felt the need to invoke her legacy as something Ukip are better-placed to uphold.

Indeed the Tories have not received the confidence bounce that might have been expected. They are expecting huge losses in the coming local election, namely losing votes to Ukip, while at the same time the memory of Thatcher has only made tensions reemerge.

It was reported in 2010 that Thatcher had actually advised Ukip on party morale. Lord Pearson, who was the party leader at the time, had approached Thatcher about keeping the mood high among party activists just before the last general election.

Thatcher is said to have advised Pearson to hire Viscount Monckton who she absolutely adored and who would regularly travel at the weekends anonymously to pubs around the country talking to people, gaining an understanding of the thoughts and feelings of the masses away from the Wesminister village.

Pearson immediately hired Monckton as deputy leader of Ukip and he was subsequently set the task of giving speeches at local branch meetings.

We could hardly imagine Thatcher giving this sort of sage advice to just anyone. Not only are Ukip fond of her and want to continue her work, but she presumably had time for them, which is why she gave Lord Pearson the name of the man she herself entrusted to win elections.

The similarities between her and Ukip are strong, too. They would be too hubristic to admit it, but they both became the thing they hate (though in Ukip’s case, at this time, they risk becoming what they hate). Thatcher wanted to roll back the state, in accordance to her admiration for Milton Friedman and the Chicago School of uber-capitalists, but instead under her real-terms public spending increased on average by 1.1 per cent.

As for Ukip they want it all, but have dubious economic plans. As Nick Cohen pointed out on Sunday:

“as it cuts state revenues, Ukip wants to double the prison population and boost the income of pensioners (its core constituency) and, presumably, pay off the national debt, too. It wants to slash immigration so Britain will once more be a land where you can walk the streets without passing black and brown faces. Yet Farage admits we need skilled migrants. As for a macro-economic policy, it does not have one.”

In the same vein Thatcher wanted to do considerable damage to national industries and at the same time be an economic superpower. She made the city rich but neglected to realise what that would do to the welfare bill – not to mention the lives of many skilled workers.

In an irony not lost on me, the only way that Thatcher was going to sustain the kind of economy she had bargained for, which was based on city greed, an abundance of unemployed workers and an emerging service sector, was to promote the very things that the EU stood for: free trade, free movement and the exploitation of an immigrant workforce to drive down wages and undercut trade unions.

Much to the horror of Ukip and many anti-EU Tories, there is a lot of overlap with what Thatcher achieved and with what has been written into every European Union treaty from Maastricht to Lisbon.

Ukip possibly is the party of Thatcherism now. Farage will run with the point that Thatcher continues to be their mood music while Cameron and Osborne are a couple of rich kids who don’t know what they’re doing, particularly on the big question of Europe.

But for one other, crucial, reason too: because both Thatcher and Ukip have cruel and crude economic policies. They are a perfect match.

19 Responses to “Thatcherism and Ukip are the perfect match”