While the latest drop in the unemployment figures should be welcomed, real wages have now been falling in every month for the past three years. 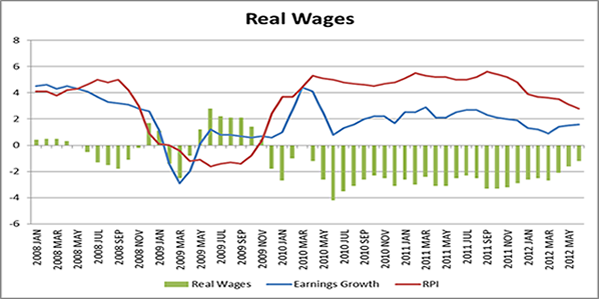 At first glance today’s labour market statistics seem to be much like those of previous months – good headline numbers but with worrying data underneath.

Unemployment once again fell whilst employment rose but youth unemployment nudged up and the squeeze on real wages continued.

But looking at the longer term trend a worrying picture is starting to emerge of a UK economy which may be shifting towards a lower wage, lower productivity state.

The pattern over the course of much of 2012 is now familiar – employment growth coupled with real terms falls in earnings.

Average weekly earnings rose at an annual rate of 1.4% in December, less than half the rate of RPI inflation which was running at 3.1%. In real terms, average earnings fell by 1.7%.

Real wages have now been falling in every month for the past three years.

Over 2012 the rate of inflation has fallen from 4.8% to 3.1%m, which have provided a large boost to household finances, but as earnings growth slowed from 2.1% to 1.4% much of the slowing of inflation failed to filter through into improved real wages.

Indeed, since September the pace of real wage falls has been picking up again.

In other words, productivity is falling. This is the so-called ‘conundrum’ of rising employment coupled with weak output growth, the UK’s ‘productivity paradox’.

The medium term picture of the UK economy over the course of 2012 is one of falling real wages, employment growth and falling productivity.

Whilst any increase in employment is obviously to be welcomed and it is far better for people to be in work than out of it, we may be seeing the start of a very worrying shift in the UK economy towards a lower wage, lower productivity model.

As the most recent TUC Economic Report, and the TUC’s Budget Submission this week, both warned there is evidence that hiring is being concentrated in lower productivity sectors. In a 2012 paper the economists Bill Martin and Robert Rawthorn argued that:

“The economy recovered in 2010 but disappointed in 2011. In those two years, around 550 thousand jobs were created in relatively low-productivity, low-paid largely private service activities that had less incentive than other activities to hoard labour during the preceding contraction and more to gain from the availability of cheaper labour. This expansion of jobs is another feature of a demand-constrained, lower wage economy.”

The combination of weak productivity, employment growth and falling real wages suggests that this trend continued into 2012. This is deeply concerning for the future – a lower wage, lower productivity economy means lower living standards in the medium to longer term.

By failing to expand demand now the government is further pushing the UK down this path.

4 Responses to “Wages and productivity falling despite positive unemployment figures”