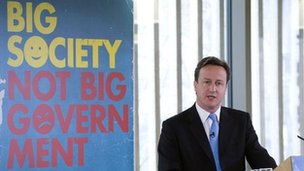 Today, Cameron’s flagship policy, the big society, has suffered a serious blow; a leading charity figure has described it as being “effectively dead”.

Sir Stephen Bubb, head of the Association of Chief Executives of Voluntary Organisations, damned the big society agenda as a result of spending cuts in charity funding and reforms.

Cameron’s rhetoric of the big society attracted much criticism to begin with, but has now become a byword for a shift of public services into the hands of charities and the voluntary sector. However, it is not the idea of the big society that is being attacked, rather the execution of it.

Sir Stephen spoke on the Today programme of how he supported the concept of the big society, but that this vision is struggling to come to fruition. He argues that the government are not enacting their ideas about reforming public services and the big society cannot progress.

According to the Huffington Post, senior figures have accused Cameron of abandoning the big society altogether, a story backed up by Bubb’s statement:

“The mood music across Whitehall has been that reform is off the agenda. The reality many charities now face is crippling spending cuts.”

Bubb’s accusation of progress being “glacially slow” has, of course, been rejected by the government, who argue that the coalition has done a lot to help charities through the cutting of red tape and bureaucracy. Despite these claims, charities have pushed for further help and commitments from the government today, in their mid-term review.

Criticism of the big society usually comes in a different form, often accusations surrounding it being a front for the shrinking of the welfare state, such as this line from Dr. Rowan Williams:

“Introduced in the run-up to the last election as a major political idea for the coming generation, [it] has suffered from a lack of definition about the means by which such ideals can be realised. Big society rhetoric is all too often heard by many therefore as aspirational waffle designed to conceal a deeply damaging withdrawal of the state from its responsibilities to the most vulnerable.”

This new level of criticism is potentially more damaging for Cameron, especially in the light of today’s ‘mid-term report’ for the coalition and his wish to remain prime minister until at least 2020, due to it damaging his credibility as a professional politician, as opposed to just an ideological critique.

2 Responses to “Cameron told the big society is “effectively dead””