In the Rotherham by-election, the Respect Party and Yvonne Ridley have been implicated in a campaign leaflet that accuses Labour of racism. 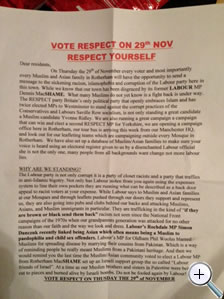 Campaigning in the Rotherham by-election, the Respect Party appear to have shown their true nature yet again.

LabourList has reported on this campaign literature sent to Asian households in the constituency (see right).

This divisive and regressive style of campaigning has been denied by Yvonne Ridley (the Respect candidate in the election) and her campaign, but Labour is still claiming it to be a violation of election law.

There is past precedent to this, however, during George Galloway’s Bradford West campaign, when a targeted was letter sent out, reading:

“God KNOWS who is a Muslim. And he KNOWS who is not… I, George Galloway, do not drink alcohol and never have. Ask yourself if you believe the other candidate in this election can say that truthfully.”

Although denied at the time, the Galloway team told The Guardian the day after the election that it was in fact them who had distributed the letter.

This comes after continued controversy on the views of Yvonne Ridley herself – Left Foot Forward has previously reported on Ridley and what she believes in: Ridley rails against Zionism, its permeation throughout society, the West and its foreign policy and Israel.

She has also personally donated money to Hamas.

This latest leaflet it is a disgusting example of electioneering at its very worst. It worked in Bradford – let’s hope it doesn’t work in Rotherham…