Yesterday saw the UN vote to make Palestine a ‘non-member observer state’ - a vote the UK abstained from. 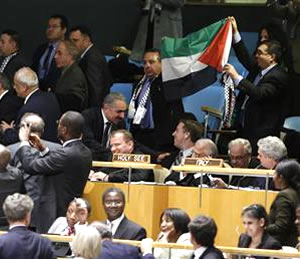 Yesterday the UN voted resoundingly to upgrade Palestine’s status to a non-member observer state, a decision met with applause, a standing ovation and celebrations on the streets of Ramallah.

Although not a member state, the promotion does afford Palestine potential membership of the International Criminal Court (ICC) and a voice in UN debates. The vote was passed overwhelmingly, 138-9, with 41 countries abstaining. Included amongst the abstentions was the UK.

Despite Left Foot Forward having clearly laid out the reasons and moral obligations to vote in favour, the UK abstained on the basis of leader of the Palestinian Authority, Mahmoud Abbas, having not explicitly stated he would renew peace talks with Israel.

“The UK Govt’s decision to abstain on the UN vote on enhanced status for Palestinians is worse than a blunder. It is a historic misjudgement.”

The UK and Germany were isolated in their abstention amongst the vast majority of European nations, who voted for the measure, including France, Italy and Spain. Many believe this move to be a step towards a two-state solution and formal recognition of Palestine as a state; more than just symbolic, it also offers legitimacy to Abbas over his militant rivals in Gaza, Hamas.

Others, however have criticised it, such as Ali Abunimah, a Palestinian-American activist. He described both the UN and the celebrations as a “distraction”.

The highest profile no votes, unsurprisingly, were from the US and Israel. The US has attempted to quantify its position and criticise the decision made by the UN by saying that the move was “counter-productive”, warning it may result in a reduction of US economic support for Palestine.

The reaction in the Israeli press has been similarly downbeat.

The liberal-left broadsheet Ha’aretz went with the headline:

Yediot Aharonot, one of Israel’s most widely read papers, went with downplaying the Palestinian celebration, emphasising their number as a “few thousand” and writing of the heckles the Israeli Ambassador received when he appeared on a large screen set up in Yasser Arafat square.

Despite some of the negative reaction, the promotion of Palestine to an observer state must surely to be welcomed.