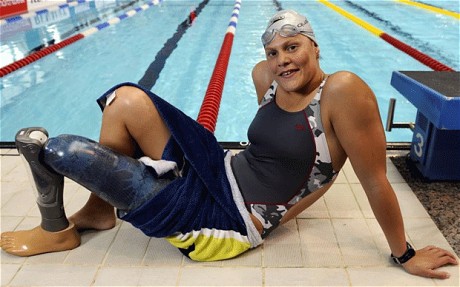 South African Natalie du Toit is one of the most successful Paralympic athletes, achieving 10 gold medals across the 2004 and 2008 Paralympic Games.

Tragically, du Toit was already on her way to be a top athlete (she competed at the Kuala Lumpur Commonwealth Games in 1998) before losing her leg in a motorcycle accident in 2001.

Yet, it was only three months later that she was back in the pool.

Du Toit made history in the 2002 Commonwealth Games in Manchester by qualifying for the able-bodied 800m freestyle, coming eighth in the rankings.

She went on to win gold in the 50m and 100m Elite Athletes with a Disability (EAD) events and was awarded the David Dixon award for Outstanding Athlete at the Games.

An Independent article back in 2009 said:

Her self-effacement is genuine and greatly endearing. Her story is truly inspirational. A teenage prodigy of the pool, Du Toit swam for South Africa at the Commonwealth Games in Kuala Lumpur in 1998, aged just 14.

Three years later she was hit by a car pulling out of a car park. “I’ve lost my leg; I’ve lost my leg,” she recalled having screamed. Her left leg was still attached but the bones were splintered and muscles ruptured. It was amputated at the knee a week later.

Five months on, Du Toit was back in the pool, going round in circles. A year later, having learnt to compensate for her lost limb with a greater use of her left arm, she stole the show at the Commonwealth Games in Manchester.

“I say, ‘If I’m able to go out there and achieve a dream, then anybody can do it’…

“I don’t think of myself as being disabled, or able-bodied. I just want to be myself and go for my own dreams and goals. For me, there’s really no line.”

Du Toit told the Paralympian magazine that she intends to retire after London 2012:

“I haven’t swum the 100m Breaststroke since the Athens 2004 Paralympic Games, and it’s crazy because no other leg amputees swim Breaststroke. And the 100m Backstroke I also want to do because I didn’t compete in it in Beijing.”

Watch her in the Paralympics – it’ll be your last chance to see this most inspirational of human beings.