The Syrian National Council have reported yet another massacre near Hama: 100 people killed, many of whom were women and children. When *will* the West act?

The Syrian government has again been accused of inflicting massacre upon its own people.

Uncomfirmed reports today claim 100 people have been killed in a small village 12 miles north of Hama, many of whom were women and children. 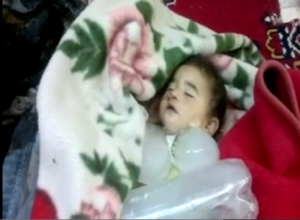 The Syrian National Council, a coalition of opposition groups, released a statement saying:

The incident happened just hours before the UN Security Council was due to meet to review the crisis.

Activist Mousab Al-Hamadee, based in Hama, criticised the UN’s lack of involvement and pleaded for intervention:

“Unfortunately they do nothing to protect us, they just come the next day after the massacres to film the corpses and see how we bury our victims… They are just watching us die.

“We want the international community to [encourage a] very powerful decision from Security Council which could provide a safe zone for Syria, maybe air cover by NATO… anything… anything that stops killing… Why is the world still watching without doing nothing?“

An unconfirmed report on Twitter, via Rose Alhomsi (@Tweets4Peace), says:

“Today, June 6, 2012, regime security forces and thugs began by shelling the farm in Al-Qubair that is located 20 km west of Hama and 2 km away from the village of Ma’arzaf. The shelling began at 1 in the afternoon and lead to the fall of nine martyrs, but this was not enough for the regime.

“Assad thugs then stormed the village, with the help of the nearby villages loyal to the regime, including the village of Aseela, and Assad militias and proceeded to attack the residents with knives and firearms. They entered the farm of Qubair amid intense gunfire and raided the homes and opened fire on residents in a random manner, without discriminating between children and adults.

“After that, they led the men out of their homes and slaughtered them with knives, then burned more than 10 bodies. They continued this until they killed everyone on the farm except one person who miraculously escaped.

“This small town does not exceed a population of 250 people, and there are only 20 homes, as the majority of the residents are from a single family consisting of uncles, brothers and sisters, who were all killed without mercy or pity, not even on the innocent children.“

• We can’t sit back and allow more massacres: It’s time for military action in Syria 28 May 2012

The British-based Syrian Observatory for Human Rights (SOHR) said the massacre was carried out at a farm by pro-regime shabiha militiamen armed with guns and knives after regular troops had shelled the area.

Reports and images of the incident spread rapidly on Twitter and other social networks but were impossible to verify independently given the lack of media access to much of Syria.

Online pictures showed charred corpses lying amid rubble and a dead child who had apparently been shot in the face.

As Ed Jacobs explained on Left Foot Forward, the UN needs to act:

It is well over a year now since we began to see the uprising in Syria, responded to with brute force by the government of President Assad.

It is clear the peace plan agreed by the former UN Secretary General, Kofi Annan, is now in tatters. Peace was given a chance and so it is now time the international community realised its responsibility and took the military action that is so badly needed to bring Assad and his murderous regime to an end.

As the evidence for intervention stacks up, will the UN security council meeting today finally result in a decision to intervene?