David Cameron looks set to meet with Mitt Romney when he visits for the Olympics - having previously snubbed François Hollande.

David Cameron’s diary has gained significant attention recently, especially after the prime minister’s refusal to meet François Hollande earlier this year. However, the Financial Times today revealed Cameron hopes to meet with US Republican candidate Mitt Romney if he visits London this summer. 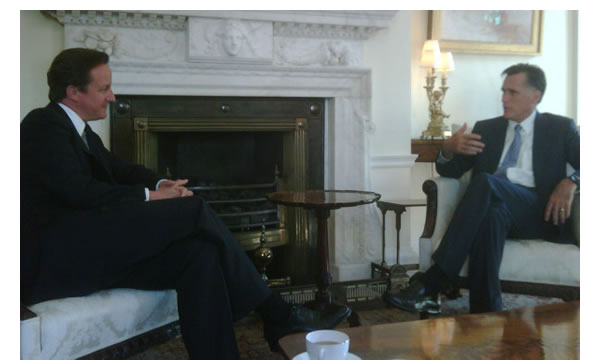 “Obviously if he does come, you can assume he will get a very attentive welcome by Downing Street.”

With another British official telling the FT:

“A Romney visit is being planned and if it goes ahead, the idea is that he would certainly get a generous reception from Cameron.”

Romney’s involvement in the 2002 Winter Olympics in Salt Lake City means he is automatically invited to the Olympic opening ceremonies in July and a visit is expected.

These comments are a contrast to Cameron’s well-publicised snub of François Hollande, an act which received much more speculation once Hollande was voted in as France’s new president last week.

Romney’s spokesperson refused to confirm whether the London visit would happen and Downing Street have pointed out he is in a “different category” to Hollande as the US Governor is not yet an official candidate, whereas Hollande was during his visit. He is expected to be annointed as the candidate at the GOP convention in late August, after the proposed visit.

This renewed enthusiasm towards Romney is in stark contrast to Cameron’s official visit to President Obama in March where he made no plans to meet with opposition candidates. Senior sources claimed that it wasn’t a snub and that the schedule for Cameron’s visit was organised by the White House.

However, when former prime minister Gordon Brown visited the States on an official visit to President George W. Bush in 2008, he met with both Democratic candidates, Hilary Clinton and Barack Obama.

What does it say about Cameron when he refuses to meet Hollande but cannot contain his enthusiasm over the simple possibility of a visit from hard-Right Republican Romney?