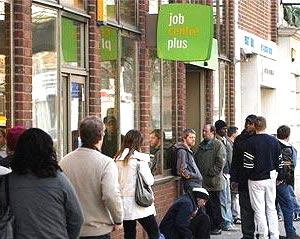 The latest Labour market statistics gave a mixed picture of the state of the jobs market.

The unemployment rose by 0.1 per cent on the quarter (as Will Straw has noted it is now higher than the US for the first time since the Great recession began), youth unemployment continued to climb and pay growth remains well below inflation.

However the headline figure of the number of people in employment rose by 60,000 on the quarter, something the government has been quick to hail as a sign that the labour market might be stabilising.

Whilst any rise in employment is obviously to be welcomed, looking in the data in more detail provides reasons to be cautious.

Yesterday the TUC warned about rising under-employment. In the UK we tend to view unemployment as a very black and white issue – people are either in work or out of it. In reality there are many shades of grey in between, people who whilst not unemployed don’t have all of the work they want to be doing.

One way of measuring under-employment is add together all of those workers in part-time jobs who say they want a full-time position but can’t find one and all of those in temporary positions who want a permanent one.  Both of these measures rose in today’s data as the chart below makes clear: 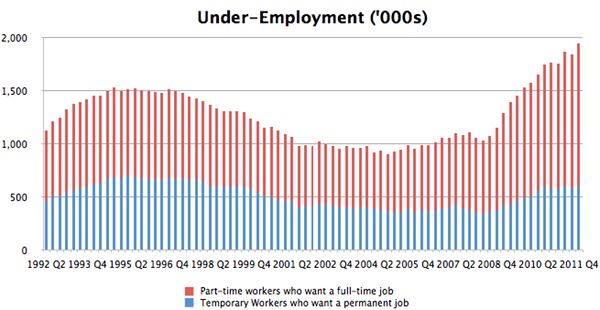 The number of under-employed workers rose by 103,000 in the last quarter of 2011, more than explaining the 60,000 rise in employment. It now stands at 1,948,000, the highest number since the records began in 1992. Precarious work is on the rise in the UK with the number of people under-employed having nearly doubled since the recession began in 2008.

In 2011 the number of workers under-employed grew by 181,000 whilst the overall number of people in employment grew by just 7,000. In other words a large rise in under-employment has massaged the labour market statistics and may have made the numbers appear stronger than they actually are.

Whilst being in some sort of work is preferable to being unemployed the long term impact on workers can be severe. People with an employment history of working multiple temporary contracts and part-time jobs can find it harder to gain a full-time position in the future through no fault of their own.

When one takes under-employment into account the underlying performance of the UK labour market over 2011 may be a lot weaker than the headline figures suggest.

36 Responses to “Employment figures mask the rise in under-employment”