With party conference season around the corner, the reality that the economy may not grow as planned is beginning to dawn for the coalition parties. 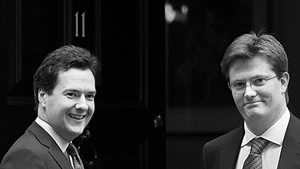 With party conference season around the corner, the reality that the economy may not grow as planned is beginning to dawn for the coalition parties. The spate of grim economic news over the summer – not least this week’s record bad unemployment figures – the eurozone crisis, the UK riots, and discontent amongst coalition backbenchers of both shades appear to have shaken ministers’ belief the economy will return to health.

To further deepen George Osborne and Danny Alexander’s mood, all this comes against a backdrop of ever more organisations and individuals calling for a Plan B, and an increasingly confident Ed Balls, who this week boasted on Newsnight:

“The evidence is clear that I was right and they were wrong.”

As Britain’s politicians prepare for the annual party conference season, the implications of economic slowdown – and the possibility of another recession – are slowly becoming clearer. The economy will dominate debate and shape strategy; a new phase in politics is opening up.

To understand the scale of the shift, consider the outlook at the start of the year. The Treasury was drawing up plans to start selling its stakes in banks, nationalised during the crisis, in 2012 in a sign of confidence returning to the City of London.

Government advisers talked confidently of next year’s Olympic Games in London as “a pivotal moment” – a shining light on the horizon – when austerity Britain would regain its verve. (Queen Elizabeth’s diamond jubilee would further lift the spirits.) All parties expected to fight the 2015 general election against a backdrop of plenty that would have followed a few years of tough-but-necessary choices.

Now the bank sales have been shelved until after the election and few in the cabinet mention shining lights. Party strategists have suddenly stopped talking about “spending the proceeds of growth” in the second half of the parliament.

Of course, the picture could change dramatically again, but for now Mr Osborne’s grand political plan – two years of pain, three years of recovery – seems in doubt. Ministers admit that come the election, the economy may still be mired in low growth and few now expect the independent Office for Budget Responsibility’s forecasts to be achieved…

For the Tory leadership, the economic turmoil is more grist to the mill of their increasingly frustrated backbenchers, who are angry with coalition policy on crime, immigration, Europe, education, taxes and more, with some privately complaining of being “taken over by a Bullingdon Club clique”.

For the Liberal Democrats, meanwhile, in his speech to activists next week, Nick Clegg will stress his party’s de-nastification of Tory policies on the health reforms and free schools, further distancing himself from David Cameron. Clegg is, though, almost certain to face further anger over the boundary review, which will hit the Lib Dems hardest, as Left Foot Forward reported earlier this month.

And for Labour, whose conference nine days’ hence falls between the two governing parties’, the key will be to further flesh out a credible Plan B, as Matt Pitt explained on these pages yesterday. Balls, as I wrote about above, may well be cock of the walk, but the Alistair Darling revelations will have reaffirmed in voters’ minds their doubts about Labour on the economy (as evidenced by this week’s poor Times/Populs poll ratings) – doubts Ed Miliband must quell in his key note speech.

All to play for then, challenges for all three leaders; the government’s economic policies may not yet have worked – but are the public ready to re-trust Labour?

10 Responses to “As conference season approaches, economic reality begins to dawn for coalition”