This morning's growth figures show that the economy grew by just 0.2% in the Q2. Given that the economy flat-lined since September, it means growth has been anaemic for the last nine months. 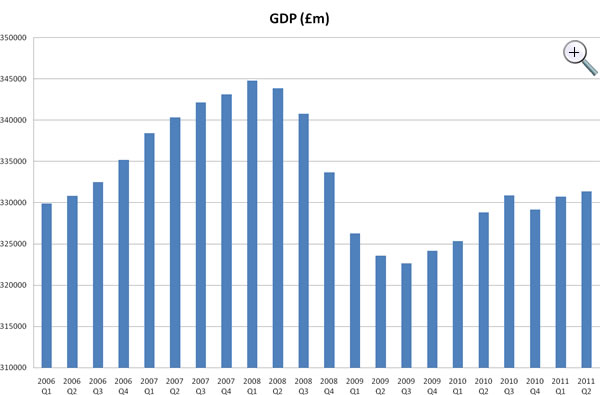 This morning’s growth figures show that – as expected – the economy grew by just 0.2 per cent in the second quarter of 2011. Given that the economy flat-lined in the six months after September, it means that growth has been anaemic for the last nine months as the chart below shows.

The OBR’s latest prediction for 2011 growth of 1.7 per cent now looks virtually impossible to achieve. Even if the economy gets back on track in Q3 and Q4, 2011 growth will barely hit 1.2 per cent – under half its original prediction of 2.6 per cent which it made in June 2010. The OBR has already been forced to downgrade its growth predictions on three previous occasions and will have to do so for a fourth time when it releases its forecast evaluation report in the autumn. Alongside this, they will be forced to raise their borrowing predictions.

Today’s figures drive a coach and horses through George Osborne’s strategy. He has said on many occasions, including in an FT article (£) last March co-authored with Jeffrey Sachs, that fiscal retrenchment would stimulate the economy through increased consumer and business spending as a result of higher confidence and reduced borrowing costs.

Instead, cuts that are too fast and too deep are exacerbating the unfavourable economic headwinds caused by what the ONS has termed “special events” such as the additional bank holiday, the Royal Wedding, and warm weather in April.

The sluggish growth was not unexpected. As I wrote on Comment is Free yesterday:

George Osborne is being urged by Number 10 to kick-start the economy. The question when will they accept the inevitable and concede that a Plan B is the only way to do this.