Peter Hain, speaking on Saturday, called for a transformation of the party and an increase in grassroots democracy, reports Dominic Browne. 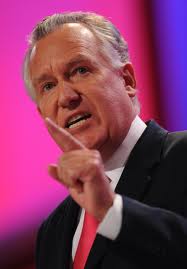 Peter Hain spoke at the Progressive Fightback Conference this weekend, saying he chose the name “Refounding Labour” for his review of the party’s structures and processes because “that is the scale of the challenge we face”.

Hain, who chairs the national policy forum for the project, saw the review’s website launch this week, and has asked for party members to set out what they love and what they would change about the party.

The main theme of the review appears to be creating more democracy and community engagement within the party which has, in the past, been labelled as being too centralist.

“On policy we have to change the whole way we create policy – how do we breathe life in the national policy forum, – creating a living and breathing process of engaging people – if we had listened more in government we would have done better on things like social housing.”

The shadow welsh secretary also commented that in today’s society joining a political party is not the norm but asked for ideas on developing links with party supporters and those sympathetic to the Labour Party’s ideas:

Talking of the importance of community politics he said:

“By operating in an entirely different way, (we can create) a better local party that is necessary to people for a change.”

Hain called it an election winning strategy citing constituencies like Edgbaston, Oxford East and Tooting – that went against the national swing in the last election. He put this down to committed and excellent local activists and organisers, who made the party relevant to voters on a local level.

In response, Sunny Hundal, editor of Liberal Conspiracy, speaking from the floor of the conference, called the Labour party structure “incomprehensible” and in need of drastic reform in order to make it more relevant.

Likewise Will Straw, writing on Labour Uncut about the review and what he would change in the party, said:

“The fixed agendas and arcane rules may provide comfort to party stalwarts, but too often our meetings resemble a Monty Python sketch.”

Mark Ferguson, editor of Labour List, seemed to strike a chord with many at the conference when he complained, from the floor, about the centralisation of information and party control, giving one example:

“Why can’t we be told who is on the long list (of candidates to stand for parliament in a constituency). Things like that which aren’t necessary for a party in the 20th century.”

Also Shamik Das, our acting editor, called for a change to the the party’s approach to door knocking, asking whether the activists’ script and pre-determined questions were not too prescriptive and missed the chance to find out more about the real issues on the doorstep.

Alongside these more general issues of party renewal came the subject of democratic primaries to elect those who will stand for parliamentary seats. Opinions appeared to be divided over the issue, with some stating it would “tear the party apart” and others stating that the party should act now on primaries before they were left behind by the Tories on this issue of grass-roots democracy.

Mr Hain stated it was an important issue for debate and commented that he believed Mr Cameron was interested in primaries but may have lost some of his enthusiasm since the election of Dr Sarah Wollaston MP, who has been “a thorn in the government’s side over the NHS, and we all wish her luck”.

12 Responses to “Peter Hain: “We must transform the party””