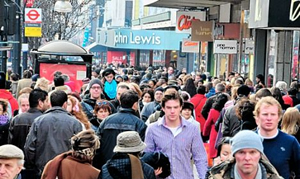 The Office for National Statistics’ e-mail announcing today’s release of the latest data on UK retail sales (pdf) chose to headline the 4.5% increase in sales values over the year to March. No mention was made of the volume figures.

This is an odd choice. Economists are much more interested in the volume figures, which provide an indication of the strength of demand on the High Street (and increasingly over the internet too).

The volume of retail sales are also an important component of total consumer spending, which is, in turn, the largest component of real GDP.

And there is much interest in next week’s release of GDP data for the first quarter of 2011, which will show how well the UK economy bounced back from the weather-affected final quarter of 2010.

The volume figures show that sales increased by 1.3% over the year to March. This is a disappointing rate of increase, particularly for an economy that is emerging from its deepest recession in almost 80 years – but it should not come as a surprise.

The high rate of price inflation (currently 4%) and modest increases in average earnings (about 2%) are combining to squeeze households’ real spending power and retail sales growth was bound to suffer as a result.

In fact, the underlying trend in sales is actually a little worse than suggested by the annual rate of increase. All of the increase in sales over the last year took place between April and July 2010. For the last eight months, the volume of sales has been flat. 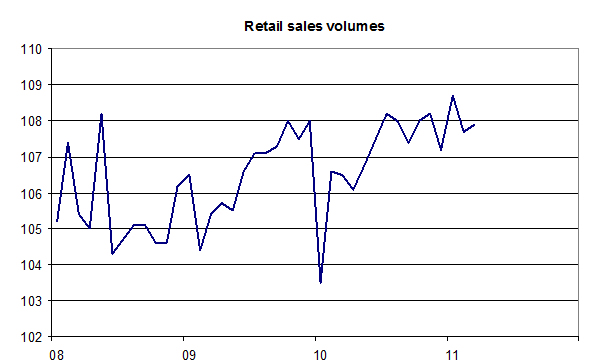 The gap between the growth in sales values and volumes – 3.2% over the last year – is an indication of inflation on the High Street. Detailed figures show that the biggest increases are in prices of automotive fuel (14.9%) and in food stores (4.1%).

Returning to the value figures, what is interesting about them is that retail sales are increasing significantly more rapidly than nominal wages. This means one of two things is happening.

Either households are spending less on other things (cars and/or services) or they are saving less and borrowing more to make ends meet. If the former is true, then aggregate consumer spending and real GDP growth are going to fall short of mainstream expectations for the first half of 2011; if the latter is true, then growth is only being sustained by households taking on more debt.

Neither will be very palatable to the chancellor, whose stated aim is to produce strong economic growth that is not based on higher levels of debt.