Ken Clarke has claimed that the Alternative Vote would make it easier for extremists to be elected to Parliament. This is the opposite of the truth. But it is one of a number of questionable and misleading claims about extremism being made by opponents of the Alternative Vote. 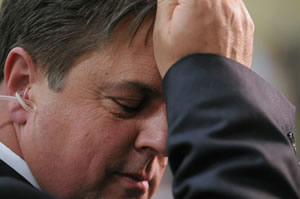 Ken Clarke has claimed that the Alternative Vote would make it easier for extremists to be elected to Parliament. This is the opposite of the truth. But it is one of a number of questionable and misleading claims about extremism being made by opponents of the Alternative Vote. Let’s look at the evidence.

1. AV would make it harder for extremist candidates to win

Despite Clarke’s misunderstanding of the impact of AV, it is entirely rational for Nick Griffin and the BNP to be campaigning against the Alternative Vote, and calling for a No vote.

Leading pollster Peter Kellner has set out why the BNP’s call for a No vote makes sense from the viewpoint of their own party interest – and has called AV:

“The most extremist-proof of all electoral systems.”

The reason why is captured in today’s shock opinion poll in France, which has Le Pen of the Front National as the leading candidate with most first preference votes:

Le Pen may be the first-past-the-post leader in this one poll. But, under the French second ballot, a close cousin of the Alternative Vote, we know that Le Pen would be opposed by 75% of voters if she made the final two-candidate run-off, as centre-right and centre-left voters would rally to the mainstream democratic opponent, as we saw in 2002, when the Front National eliminated the Socialists, whose voters supported Jacques Chirac.

Supporters of systems of proportional representation may well have to accept that these increase the possibility of the BNP winning seats if the far right party could increase their share of the vote to 5% or more (they won 1.9% in 2010). By contrast, supporters of the Alternative Vote have a cast iron case that it makes BNP victories even less likely.

It is only fair to point out that the BNP remain a long way short of winning a Westminster constituency under first-past-the-post. Honest supporters of the No campaign would have to acknowledge that they would be even further away under the Alternative Vote.

The BNP have been able to win local election seats on minority votes. As Kellner argues, it very likely that Alternative Vote elections would wipe them out in local government.

(One irony of Eric Pickles’ offer last year to consider withdrawing the Conservative candidate from Barking to ensure that the BNP could not split the mainstream democratic vote to win was that such a tactic would be entirely unnecessary under the Alternative Vote: there would be no case at all for disenfranchising Tory voters by removing their opportunity to vote for their party. But a full field of mainstream candidates would never present the risk of an extremist victory under AV which Pickles clearly felt was a risk under first-past-the post).

Few opponents of the Alternative Vote claim extremist candidates can win. (They mostly make the entirely contradictory argument that only lowest common denominator candidates will win 50% of the vote).

But several other claims about how AV might boost the BNP were used during last Thursday night’s Oxford Union debate, where I was part of the Yes to AV team, with Katie Ghose of Yes to Fairer Votes! and ex-independent MP Martin Bell, which won the students’ vote on the night.

2. The Churchill canard: do the second preferences of the least popular candidates given a higher priority?

Bernard Jenkin MP produced a splendidly entertaining Winston Churchill impression at Thursday night’s Oxford Union to promote the claim that AV decides elections on “the most useless votes for the most useless candidates”, as Churchill once claimed. Shrewsbury MP Daniel Kawczynski complained that this meant that, if the BNP did badly and came last, it might be that only their voters would decide the winner, because those transfers “would get counted first”.

The Alternative Vote puts a “post” into first-past-the-post election. A candidate can get past the post without any transfers at all by getting 50% of the first preferences. If they get 49%, and then pass the post after only one or two candidates have been eliminated, it is not the case that the lowest placed transfers have been given greater weight than untransferred votes.

The untransferred votes are part of the equation too – an equation which shows that, once the 50% ‘post’ has been passed, the leader could not now be overtaken, even if every remaining vote would transfer to the same rival candidate. It is clear too that every voter only has one vote in every round of the count, whether that vote is still with their first choice candidate while they remain in the race, or has transferred after their elimination.

Daniel Kawczynski told the Oxford Union that it was quite wrong that BNP voters could decide the result in his Shrewsbury constituency. This struck me as nonsense. Kawczynski has a 15% lead over the Liberal Democrats and a 23% lead over Labour. The 2% who vote BNP can’t decide who wins.

Perhaps Kawczynski means they could do in an extremely close election. But this is a very weak and rather misleading objection to the idea of seeking to elect the candidate with majority support in the constituency.

The leading candidates must appeal to over a quarter of the remaining electorate to build majority support; of course, that means that any candidate who pandered to the 2% BNP vote on the fringe would expect to pay a heavy electoral price for doing so.

4. Why would extremist voters vote mainstream too?

In any event, BNP voters are the least likely of all to have a second preference – as this relies on their deciding to “vote extremist – and vote mainstream too”.

The “BNP voters will decide the result” claim entirely depends on most voters who have gone to the polls to express a “send all the immigrants back” message or a “plague on all your houses” message deciding to vote for a mainstream winning party too.

Is that how voters think? The “No to AV” campaign’s claim would depend on large numbers of voters thinking something like this in the voting booth:

“Well, it’s the BNP for me. I’m sticking two fingers up to the entire political class.

“Oh! I see I’m allowed a second preference too. Hmm. How interesting. Well, come to think about, maybe the Liberal Democrats aren’t so bad after all. I’d quite like to see them defeat the Conservatives around here!”

It is very likely that many BNP voters will cast only their first preference, while others might also vote for the English Democrats, or perhaps a more mainstream anti-politics appeal of UKIP, before exhausting their ballot without voting for the major parties who are in the top two in all constituencies.

BNP votes could decide results under AV only if several extremely unlikely conditions were met. They would need to have more votes than the winning margin (which is very rare); their voters would need to express a mainstream second preference (which is unlikely in most cases), and even where they do, those preferences would need to break very unevenly for one major candidate over another to have the potential to be decisive (and there is no evidence that they would do so). The electoral geography of BNP support – strongest in heartland Labour seats – makes their ability to affect results even less plausible.

Pandering to BNP votes would prove a self-defeating strategy under AV. The winning candidate needs to seek 50% of the vote – since the BNP have under 2% of the vote and 80% of voters very strongly disapprove of them, any association with them is going to be toxic. There is simply no hard evidence that BNP voters would be more likely to play a decisive role under AV than under the current system, where extremist voters could already decide to vote for one of the likely winning candidates over another.

The fact that the extremist BNP prefer first-past-the-post to the Alternative Vote does not and should not delegitimise the arguments of mainstream democrats from the Conservative or Labour parties who think first-past-the-post a better electoral system for their own quite distinct reasons. But it does make their attempt to argue that the Alternative Vote would be good for the BNP especially unconvincing.

66 Responses to “How would extremists fare under AV?”