This morning the deputy prime minister Nick Clegg repeated the now discredited claim that when the coalition formed Britain was "on the edge of bankruptcy". 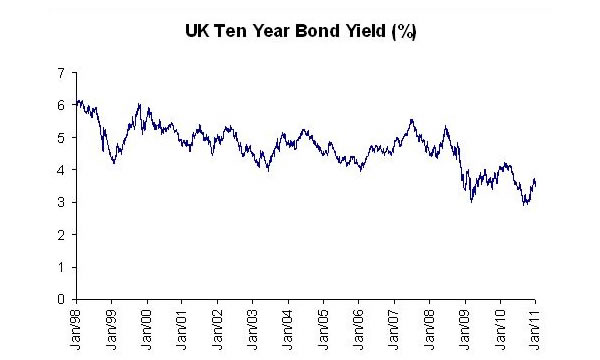 On the Today programme this morning deputy prime minister Nick Clegg repeated the now discredited claim that when the coalition formed Britain was “on the edge of bankruptcy”. The argument dates from a December 2008 Telegraph article by David Cameron and is an important component of the government’s “there is no alternative” defence of its policy of spending cuts.

Despite Mr Clegg’s claims UK bond yields – the best measure of how the market perceives the risk of default – were near record lows in May.

In fact the yield on UK government ten-year bonds was only 3.84 per cent on the day on the general election. It closed on Friday at 3.62 per cent. This does not look like the bond yield of a country that was “on the edge of bankruptcy”.

Greek bond yields soared to over 12% in May, whilst Irish yields hit over 9%. There is simply no comparison. If a yield of 3.84% implies the “brink of bankruptcy” then it is hard to see how George Osborne is so confident that the UK bilateral loan to Ireland, with a yield more than twice as high, will ever be repaid.

Former Treasury Permanent Secretary Andrew Turnbull has already made clear what he thinks of the “brink of bankruptcy” claim, as politics.co.uk reports:

“Well I always thought that we were capable of producing a financial settlement that wouldn’t take us into Irish and Greek problems,” Lord Turnbull told the committee.

“A very large part of our debt was domestically held. If people are going to sell gilts they’ve got to buy something else. Who are these great shining examples of people who are issuing rock solid debt you want to buy?”

When pressed on whether he thought the UK was on the brink of bankruptcy, the peer replied: “No, I don’t.”

Whatever you think about the fiscal mess that the coalition inherited, these are not the characteristics of a country on the “brink” of bankruptcy or default.

70 Responses to “Clegg’s latest lie: UK was on verge of a “sovereign debt crisis””