David Cameron's claim today that the government had managed to protect funding per pupil, and "on top of that" to then introduce a "pupil premium" was misleading. 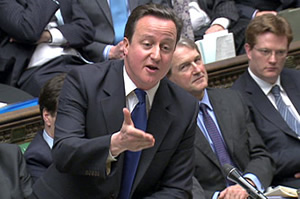 David Cameron said at Prime Minister’s Questions today that the whole House ought to take pride in the fact that the government had managed to protect funding per pupil, and “on top of that” to then introduce a “pupil premium”. His government did pledge to do both of these things – to protect the current schools budget from cuts, along with the further promise in the Coalition Agreement that “we will fund a significant premium for disadvantaged pupils from outside the schools budget”.

Unfortunately, it has in fact managed to do neither of them, as analysis of the Comprehensive Spending Review settlement shows. The prime minister’s claim today the House was a misleading one.

In fact, the pupil “premium” now involves reallocating funds from within the existing schools budget, so that funding per pupil is shrinking in real terms even after the premium is included in the calculations.

Firstly, Cameron’s claim depends on excluding deep cuts of around 60 per cent in capital spending on schools. Ignore those school funding cuts and there is then an increase in real terms of ‘current’ schools spending of 0.1 per cent a year – but only once the pupil ‘premium’ money is counted. So it looks as though the government could get close to meeting the first pledge (protecting current school funding) while breaking the second (introducing a pupil premium on top).

However, they don’t even quite manage to make that stack up. Rising pupil numbers – of around 2.7 per cent during this period – easily outstrip this small rise. When this is factored in, Luke Sibieta of the Institute for Fiscal Studies (IFS) says that the spending settlement means that average spending per pupil will in fact fall in real terms by 0.6 per cent a year, or 2.25 per cent over four years.

So there is a real terms fall in funding per pupil even once the “premium” is counted in. To claim that the government has kept these pledges through a “flat cash” settlement is simply sleight of hand, seeking to disguise a 9-10 per cent real terms cut.

There are significant dangers in funding a “premium” by cutting funding for most pupils in most schools, as the government now proposes. The Financial Times’ detailed scrutiny of the schools spending settlement reported that:

“More than two-thirds of pupils will attend schools that suffer a cut in funding.”

This risks turning what ought to be a popular fairness policy into a source of grievance. It is worth acknowledging that deputy prime minister Nick Clegg fought but lost a long and hard battle inside government to keep the Coalition Agreement promise of “additional” funding from “outside the schools budget”. Clegg even tried to end the Whitehall argument by declaring victory publicly in a speech just five days before the Comprehensive Spending Review, in which he claimed to have secured £7 billion in “additional” funding for the premium.

Clegg’s Downing Street aides were crystal clear about the significance of his repeated use of the word “additional” in referring to this funding, telling newspapers that

“The money for this will come from outside the education budget. We’re not just rearranging furniture – this is real new money from elsewhere in Whitehall.”

But it wasn’t. Education secretary Michael Gove admitted straight after the spending review that the pupil premium cash was not new money from outside the schools budget, telling Andrew Marr that the policy details would determine “which schools will find that they’re actually losing funding, and which schools will find that they’re gaining funding” as a result of the premium.

Liberal Democrats continue to point to the introduction of the pupil premium as a flagship achievement. Without the additional funding, it is difficult to make a credible claim that any “premium” exists.

Those in the Liberal Democrats – and all other parties – who believe the idea and motivation behind the premium is a good one ought to be stepping up pressure on the government to think again and keep the promise it made about funding a premium. Lib Dem deputy leader Simon Hughes told Channel Four News after the spending review:

“We wanted a pupil premium that was an add on. If it’s not, then again there is clearly work to be done.”

That remains true. It is surprising that the prime minister today gave what appeared a clearly pre-briefed answer which is so starkly at odds with the facts.

David Cameron should now revisit the question of school funding, so as to come up with a policy which would keep the government’s school funding pledges and make what he told the House of Commons today true.