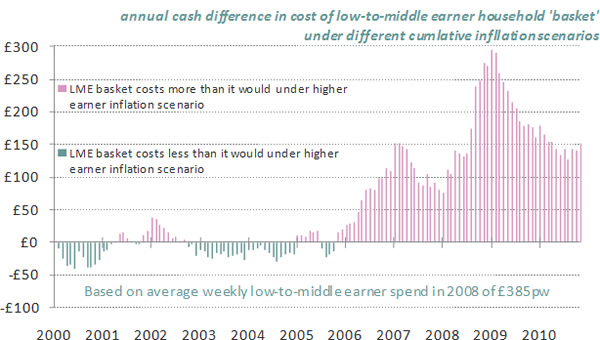 Matthew Whittaker is a senior economist at the Resolution Foundation

Today’s figures from the Office for National Statistics shows that inflation rose in the UK in November, with the CPI increasing from 3.2% to 3.3% – above the government’s official target of 2% for the eleventh month in a row – and the wider RPI measure rising from 4.5% to 4.7%.

With average annual earnings growth sitting at just 2.2% in October, the persistence of above-target inflation means that a large number of households are facing falling real wages and a squeeze on their living standards.

Scratching beneath the surface reveals that some households are feeling the pinch more than others. In relation to earnings, the average growth figure is likely to overstate the reality for those in lower paid jobs, with the gap between the top and the bottom of the earnings distribution growing consistently over the last 30 years; in relation to prices, the composition of the overall inflation figure means it is again those in the lower half of the income distribution who are likely to be facing the most rapidly rising costs.

November’s increases were driven in large part by rising food bills, which account for 12 per cent of disposable income in low-to-middle earner households, compared with just 7 per cent in households with above-average incomes.

This is not a new phenomenon. Increases in the cost of staples such as food and fuel in the last decade mean that low-to-middle earner household bills are £150 a year higher than they would have been if they had been subject to the same level of inflation experienced by households with above-average incomes.

And there’s no respite in sight. Next month we’re likely to see the effects of recent price hikes in utility bills, which will again fall hardest on those with the lowest incomes, and in January the VAT increase – which is regressive across the income distribution – kicks in. Policy makers will continue to point to the temporary nature of these effects, but those already struggling at the edge of their means will reasonably want to know how long this ‘temporary’ period is going to last. Real earnings have been falling for 12 months and, according to OBR projections, will not grow again until 2013.

Millions will be forced to tighten their belts, but many low-to-middle earners are running out of room for manoeuvre.