The controversy over Rod Liddle's comments on a Millwall bulletin board continues. But the mainstream media has left the story virtually unreported. 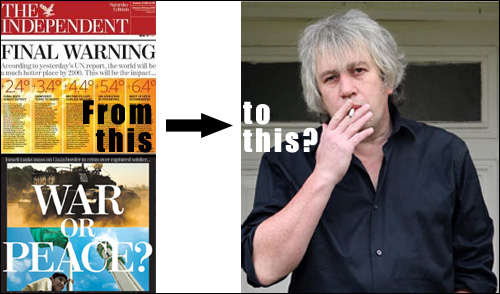 The heated controversy over Rod Liddle’s potential editorship of The Independent is being talked about by journalists in every national newsroom in London. But several don’t seem to think that the story is worth sharing with their readers.

The Guardian broke the story of Liddle’s potential editorship, and has consistently covered developments online and, again today, in print. The Mail on Sunday reported last weekend on Liddle’s comments on a football website (a story further developed by blogs such as Liberal Conspiracy over the last week). Niche titles such as the Jewish Chronicle have been involved.

But that’s just about all you would find in print.

There has not been a word in The Independent or Independent on Sunday, for obvious reasons, as staff there fret about the future.

The Evening Standard boasts that it keeps across the talking points of the metropolis, including the buzz in the media village. Rod Liddle was worth a long and interesting interview last Autumn, where Viv Groskop challenged Liddle over one of his more notorious misogynistic rants.

But that Lebedev-title has also kept a very stony silence since Liddle’s editorship was mooted.

Rod Liddle writes for the Sunday Times. Neither it nor its sister paper seems to have written a paragraph about this either. (Liddle’s own defence of the right to be stupid, vile and obnoxious was officially about something else entirely).

He blogs for The Spectator too. Only Liddle himself has mentioned the row there.

It has been said that the Telegraph’s famously reclusive owners, the Barclay brothers are not keen for their titles to dig into media controversies, perhaps for fear attention could be reciprocated.

In any event, the only reference to the row in either the newspaper or online would seem to be in three separate pro-Liddle ‘friends of Rod’ blogs from Toby Young, Andrew Gilligan and James Delingpole. (Young’s extraordinary blog might be considered the definitive pro-Liddle ‘argument’).

Liddle’s friend Catherine Bennett also wrote for The Guardian, worrying about the free speech impact of the Facebook and blogosphere challenge to Liddle’s possible editorship. Her argument was memorably summarised by Sarah Ditum as being that:

“freedom of speech, if it means anything, means journalists never having to be told they’re wrong”.

And yet, excepting Bennett’s Guardian colleagues that would seem to summarise a stronger instinct for most national titles than any itch to clarify Liddle’s account of the possible hacking of his Millwall account, and which of the public comments he acknowledges authorship of.

(That The Guardian have also now given space to another friend of Rod, Tim Luckhurst, to criticise their coverage as unfair does somewhat undermine his own case).

Perhaps it is just too small a story? Well, Stephen Fry leaves twitter for 12 hours was a national news story for most outlets, usually obsessed by any story with a social networking angle in every other circumstance.

Try this thought experiment: had those talkboard messages been written by Simon Cowell, by Russell Brand, by Richard Sambrook of the BBC, or by some Labour or Tory parliamentary candidate you have never heard of, would our newspapers have demonstrated quite such lofty disinterest?

But save one to be grateful that no longer entirely control what does or doesn’t count as news these days.

A related mystery, as Left Foot Forward noted this week, is why not a paragraph seems to have been written in print about probably the most offensive mfcmonkey comments of all: a sexually explicit discussion of a large number of named women journalists which was initiated by Liddle, or begun under his username at least. (That discussion has now been redacted from public view, restricted to specific Millwall online users).

The implications for the Indy of Liddle’s sexism were addressed by Gaby Hinsliff before those talkboard comments were revealed. But if “the sisterhood are on the warpath”, those are mainly covert operations to date.

Perhaps it would be difficult to report some of those comments in a family newspaper or blog.

But might editors also discouraging reporters or commentators who might want to cover that from doing so?

Or is it simply that the media culture inside our national titles is such that even this level of gross and personalised misogyny can be laughed off as “just a joke” and “Rod being Rod”?