Cameron's Lithuanian partner reveals his homophobic views. Valdemar Tomasevski describes homosexuality as an "evil" from which children should be protected. 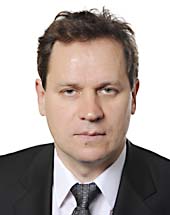 David Cameron’s Lithuanian partner has revealed his homophobic views in an email to Left Foot Forward. Valdemar Tomasevski MEP – leader of the ‘Electoral Action of Poles in Lithuania’ and a member of David Cameron’s alliance of far right Europeans – describes homosexuality as an “evil” from which children should be protected and says “we cannot allow these people to claim … that homosexuality is normal.” He goes on to say that most “[most] abortions are made from ignorance.”

The MEP’s own website contains an interview in Lithuanian setting out his views on a range of social issues. This blog asked for a translation and received the following from Tomasevski’s office:

“I accept existence of homosexuals – we are tolerant state. But homosexuality is also a very good example of the wrong understanding of tolerance. We have to respect every human being, including those who experience sexual attraction to the same-sex.

But we cannot allow these people to claim and explain even to children at kindergarten that homosexuality is normal and encourage people to become homosexuals. Those who talk about tolerance should understand that and respect the constitutional right to protecting children from evil.”

The revelations come on the back of an investigation last month by Soho Politico on Liberal Conspiracy that Tomasevski had “personally voted for a Lithuanian law that has been described as a harsher, more wide-reaching version of Britain’s Section 28.” On his own blog Soho Politico asked last week whether the Tories refused to to condemn the Lithuanian hate law to “appease [Valdemar Tomasevski] their anti-gay Euro ally.”

In the email from the Lithuanian politician’s office to this blogger, Tomasevski also set out his views on abortion. He said:

“I generally do not use the word “abortion”. This concept was invented by the Bolsheviks. Lenin was the first who introduced abortion laws. I prefer the term “killing unborn children.” Most of these abortions are made from ignorance.

“I do not want the absolute prohibition of abortion. There should be certain exceptions: If the woman’s life is at risk, if rape has taken place, where there is a risk of birth defects.

The remarks are likely to reopen doubts about David Cameron’s alliance with European politicians who show sexist and Islamophobic tendencies, deny the existence of climate change, and celebrate the Waffen SS.