'Protest has always been an important element to the COP negotiations.' 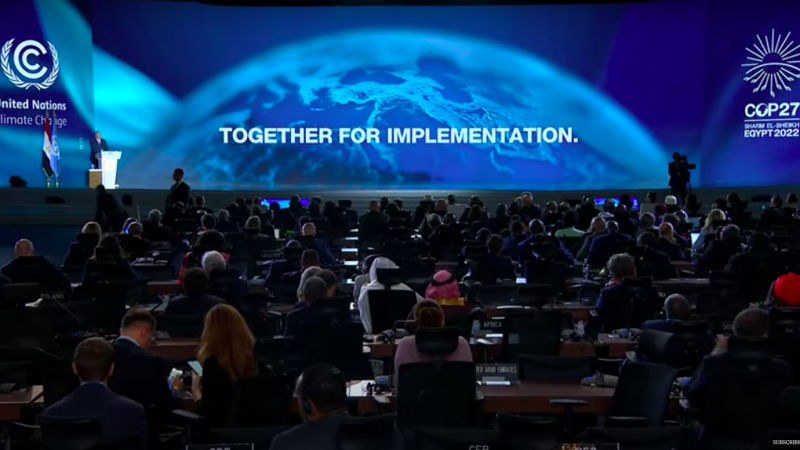 When it was confirmed that COP27 would be held in Egypt, it was clear that people’s democratic rights would be limited. As delegates settle into the COP venue, activists are finding creative and accessible ways for their messages to be heard.

Protest has always been an important element to the COP negotiations. They not only take place in the venue to highlight specific concerns about the process, but tens of thousands of people attend public protests in the streets of the host countries. Last year’s Fridays for Future protest attended by Greta Thunberg saw tens of thousands of young people from around the world demanding climate action over words.

However, in Egypt not only is protest illegal, but the country is renowned for detaining political prisoners without fair trial. A few days before COP began, it became clear that visitors to Egypt weren’t immune to this oppressive regime’s actions. On the 30th October an Indian environmental activist was arrested by Egyptian police and imprisoned in Cairo for carrying a small sign calling for action on the environment and climate. From his cell, the campaigner called a lawyer in the city. When his lawyer arrived, he was also arrested while trying to meet his client. They were later released without charge, but the scene has now been set that there will be no right to protest in Sharm el-Sheik.

Fears about how oppressive having COP in Egypt were deepened when news broke about the ability for the official COP27 app to track delegates and access their data. This app requires you to enable a range of permissions to use it, including the ability for Egypt’s ministry of communications and information technology to view emails, scour photos and determine users’ locations. This data has the potential to be used to crack down on protest and arrest dissenting voices. There’s currently an estimated 60,000 political prisoners in Egypt, with many arrests happening ahead of COP in a clamp down on protest. This kind of technology is especially concerning for Egyptians and those living in African countries who could be being continually tracked after COP has ended in two weeks time.

So, who is harmed by this shift in activism at COP27. According to an anonymous climate campaigner “Egyptian people and the Arabic population”, she went on to describe a protest happening in the venue tonight where Arab activists decided not to attend, unsure about what the consequences could be.

It’s clear that civil society has a big role to play in influencing the process here at COP. The tradition of protest in the venue is continuing as long as it follows UNFCC rules, which includes not blocking any walkways or targeting specific countries or companies. One climate activist said” “We still have some liberty, but we cannot take to the streets”.

Yet to ensure that protest remains accessible, activists have been looking for creative ways to send a message and get heard. One such protest is requesting delegates and badge holders to wear different colours on different days to show solidarity and send a message on specific issues. Yesterday, activists wore green in solidarity with African feminists, today will be white for political prisoners with a focus on those detained in Egypt. A climate activist told me that there will also be a big event with people wearing blue on Friday, but the details are still to be confirmed.

These small acts of protest are an important way of sending a message, but it’s clear that wider engagement through protest from the public will mean that this COP will be missing the voice of the community from it. The rumoured protest in the desert isn’t to date going ahead – possibly a sign that activists are concerned about the consequences of protesting in Egypt.

Many activists have worked hard to get to Egypt, with many barriers to attendance including expensive travel, declined visas and accommodation bookings being cancelled before the rates have doubled. Not being able to properly engage in the democracy of COP is just one final barrier to ensuring diversity and inclusion at these negotiations.