'With leaders mingling with the oil industry that have directly caused the climate crisis, civil society groups are concerned about a lack of meaningful action from COP27. ' 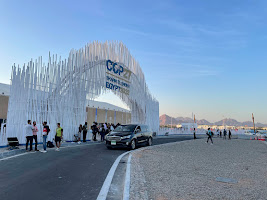 COP27 has kick-started in Sharm el-Sheikh. After another year of climate catastrophe, the invasion of Ukraine by Russia, and a global cost of living crisis, will this COP finally be able to secure climate justice?

Around the world food and energy prices are soaring, the invasion of Ukraine still dominates our headlines, and the world has experienced unprecedented extreme weather. In combination, these issues have significantly complicated negotiations at this year’s COP. These negotiations will be some of the most challenging yet.

Despite the complex back-drop, the need to implement real climate action to keep global temperatures below 1.5º of warming have never been so stark. If this COP achieves anything, it must be implementation over warm words. Whether that’s emissions reduction, forest protection, or genuine climate finance, COP27 must focus on what actions will reduce climate catastrophe.

Already, extreme weather is devastating developing countries that have done the least to contribute to the climate emergency. This year, in Pakistan alone, floods have killed 50% of the country’s crops, destroyed the homes and livelihoods of thousands of farmers, and left over $30 billion in damages in its wake. This is a social justice issue that the global community must take action on.

Yet, while some countries like Pakistan struggle to not only rebuild their country, but also adapt to future catastrophes, some of the world’s biggest polluters are failing to take responsibility for their emissions and the impact that they are having on our climate. For example, countries like the UK are already falling short by missing the deadline to provide $288m to the Green Climate Fund to help developing countries adapt and mitigate against climate change. These payments are just a small fraction of what needs to be committed to ensure that we are redressing climate inequalities.

From island nations that are at existential risk of disappearing under rising sea levels, to the droughts in Africa that have devastated communities, the call for loss and damage to be discussed at this COP is finally on the agenda. Even just having it on the agenda was fiercely fought for and negotiated, causing a delay in the agenda being published.

This is a big win for many developing countries, but in a press conference earlier today, Ahmed El Droubi, Campaigns Director for Greenpeace MENA, stated that although “loss and damage is on the agenda, it fails because it isn’t in terms of compensation and liability”. He went on to say that all action to finance loss and damage must “be about “liberation and not charity””.

This followed from further criticism on the progress on the loss and damage agenda from world leaders, with Mohamed Adow, founder and director of Power Shift Africa, stating that today was a “poor start” to COP. He went on to highlight the failure of the biggest polluters to not only fulfil their financial commitments from Copenhagen, but have been working to turn Africa into “Europe’s gas station” while they expand oil and gas licences on the continent in reaction to the energy crisis. These operations in Africa lock communities into obsolete infrastructure that the world agrees will be superceded by renewables in a few years time.  It also highlights the vast inequality of European countries extracting resources in African countries to make profits, while leaving 60 million Africans without  electricity or the investment to connect them.

Many delegates and activists at this COP have called out the continued investment in the fossil fuel industry. Tasneem Essop – Executive Director of CAN International – stated that, in reaction to the invasion of Ukraine, “the fossil fuel industry has been emboldened by the opening of space for the expansion of investment in fossil fuels and the dash for gas in Africa and they are here in this COP in numbers. There were numbers in Glasgow, but at this COP there are even more”. She is currently working with civil society to create a conflict of interest policy for future COPs to ensure that the petrochemical industry is removed from  the process.

With leaders mingling with the oil industry that have directly caused the climate crisis, civil society groups are concerned about a lack of meaningful action from COP27. However, with developing nations successfully inserting loss and damage onto the agenda, the next two weeks will be their best opportunity to push for real actions and commitments on loss and damage that will help support them during times of crisis.