Quentin Letts declared "I give up!" and "forget about it" after being challenged on the government's Rwanda deportation policy 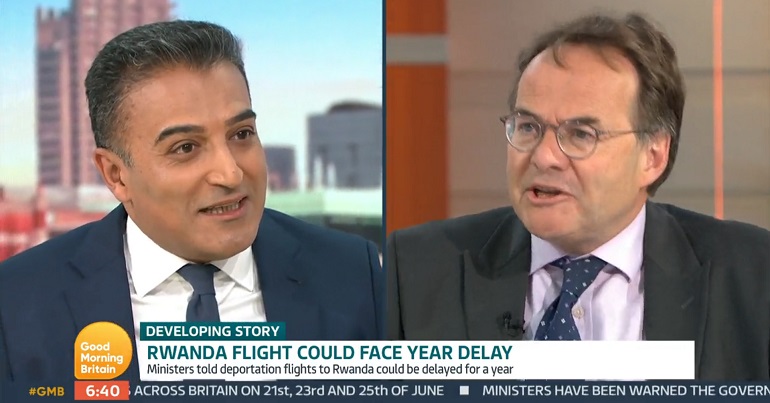 On Monday night, the European Court of Human Rights (ECHR) intervened to prevent a deportation flight from taking a group of asylum seekers to Rwanda. Since, right wingers in government and the media have been up in arms, with some calling for the UK to leave the (ECHR), and most doubling down on the Rwanda policy.

Quentin Letts, sketch writer for The Times was among those seeking to defend the policy today. But it all went horribly wrong when he appeared on Good Morning Britain. Sam Bright, from Byline Times described it as a “mini meltdown”,

Presenter Adil Ray asked Letts the following, “Why are we all being asked to budge up, empty our spare rooms and being paid to invite Ukrainian refugees here of which we’ve allowed 100,000 to apply? Yet for Afghanistan and Syrians, the vast majority can’t apply like the Ukrainians, and we’re threatening to send them when they do finally get here to Rwanda. Why is it different?”

Letts’ response was, “Because Ukrainians, as far as I know, aren’t washing up dead on the beaches of Dover”.

Ray was quick to point out that this was the very point of his question, “Yeah, but that’s my point. They’re not because they’re allowed to apply online”, continuing by pointing out, “The Afghans do not an online visa system”.

As Ray highlighted this, Letts could be seen – perhaps tellingly – scratching his head and looking up to the ceiling.

Once again, Ray was forced to intervene. While Letts attempted to claim multiple times that there are ‘legal routes’ that asylum seekers could take, Ray corrected him to say “there aren’t actually”.

At this moment, it all fell apart. Letts declared three times “I give up!” After being told twice more that there are, in fact, not currently legal routes for migrants crossing the Channel to take, Letts shook his head, sighed and mumbled, “forget about it”, and then said, “there’s no point talking to you, because [there’s] four of you against me, it’s just absolutely pointless.”