There's a lot of ifs when it comes to a cross-party pact, but Labour needs to think big to climb an electoral mountain in 2024. 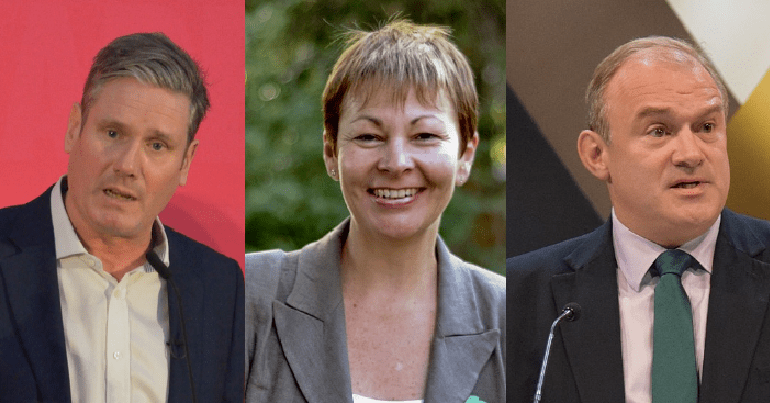 Labour could win up to 351 seats by working with other progressive parties at the next election, new analysis has shown.

Now fresh analysis of the focaldata poll by Best for Britain shows Labour could win up to 351 seats if the party works with the Liberal Democrats and Greens at the next election.

In a scenario where Nigel Farage’s party stands down for the Conservatives, as happened during the 2019 General Election, Labour’s seat total could fall to just 251 seats.

But if Labour join forces with the Greens and Lib Dems, the party would be on course for 351 seats at the next election – handing Labour a majority in Parliament, regardless of any pact between Farage and the Conservatives.

At the next election – expected in 2024 – Labour needs to gain 124 seats to win with a majority of just one, recent analysis by cross-party group Compass showed. That would be equivalent to a uniform swing of 10.5%, larger than the Labour landslides of 1997 and 1945. “This scenario also assumes that Labour can make a big comeback in Scotland. Discounting Scottish seats leaves Labour needing an unprecedented uniform swing of 13.8%, and winning all 124 seats would require constituency swings of as high as 15%,” one of the authors told this site.

Best for Britain CEO Naomi Smith said the focaldata poll shows Labour “need the support of other parties to make a return to government in 2024.”

Pollsters can’t predict how Labour’s support might change if such a pact proved unpopular, but the analysis suggests cooperation could be vital under Westminster’s winner-takes-all system.

Without a pact, the polling suggests Labour and the Conservatives are currently neck-and-neck in terms of seats.

Scenario: Reform Party stands down for Conservatives and internationalist parties work together (including Labour) – BFB analysis

Commenting, Best for Britain CEO Naomi Smith said: “Labour has done well to rebuild since last year’s election collapse, but as things stand they will need the support of other parties to make a return to government in 2024.

“This reliance is even clearer when you add Nigel Farage’s Reform UK party into the picture, previous iterations of which have stood aside for Conservative candidates over the last two elections in a show of nativist unity.

“If Keir Starmer wants a shot at No 10 in three years, the party must be open to working with the Greens and Lib Dems, particularly given the impending constituency boundary changes and SNP strength north of the border.”

Unite to Reform Director Peter Dunphy added: “The recent lesson from the US is that populist nationalism can be defeated, even under a First Past the Post system – but only through unified action by the all progressives of the centre and left.

“In the UK exactly the same applies and this polling demonstrates that Labour cannot win by itself. But it also shows that by working together, progressives can defeat the Conservatives.

“It is time for all parties of the centre and left in the UK to find ways to work together and to make this possible Labour must support electoral reform. Nigel Farage will cause trouble for the Conservative Party but he will never act in a way that risks them losing power. For as long as Labour, Greens and Liberal Democrats are in conflict they will be outmanoeuvred.”

Neal Lawson, Director of Compass, told Left Foot Forward: “This in-depth polling shows the huge political gains from progressive cooperation – but this isn’t going to come out of thin air. It will need progressives from all parties and non sharing ideas and working together to build trust – not just to defeat the Tories but to preens the country with a feasible and desirable alternative to them.”

However, Green Party co-leader Sian Berry told a hustings last year she ‘couldn’t honestly see‘ a pact between Labour and the Greens at the next election.

Methodology behind Best for Britain analysis

The original MRP poll was conducted by Focaldata. Total sample size was 22,186 adults. Fieldwork was undertaken between 4th – 29th December 2020. Best for Britain’s analysis can be downloaded here.

For the purpose of this analysis, Best for Britain have assumed that 88% of Labour, Liberal Democrat, Green and SNP votes would break to the leading opposition party in the event of a pact, with 7% being redistributed to the Conservatives and a further 5% would be unwilling to change their vote (in a ‘no pact’ scenario this does not apply). This is based on polling analysis of how votes break between parties undertaken by YouGov/Best for Britain prior to the 2019 general election. Best for Britain have also assumed that the Brexit Party vote in focaldata’s poll will be replicated by the Reform Party.