Organisations have mounted an energetic campaign against the mining proposals, in a bid to hold the local authority to its word on climate breakdown. 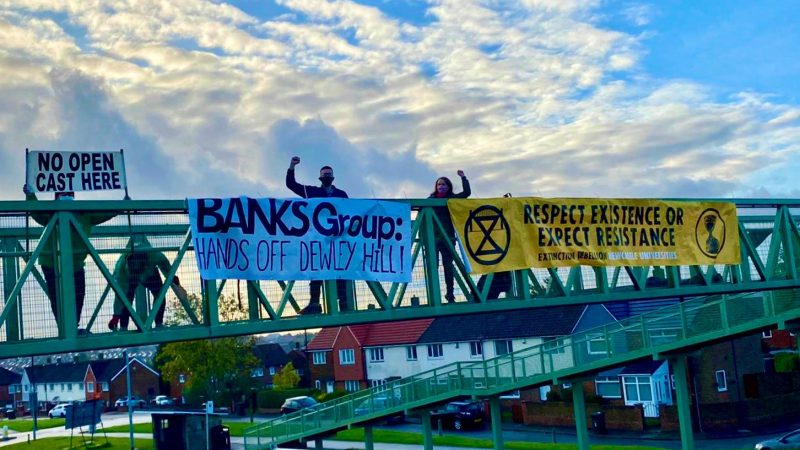 An area once famed for industrial-scale coal extraction may have seen the final nail delivered in opencast mining’s coffin this week, after Newcastle City Council unanimously voted down a proposal for a new scheme on the outskirts of the city.

On Friday councillors voted against proposals for what is thought to be the last surface mine application in England, ahead of the upcoming 2024 phase-out deadline for the burning of coal at UK power stations.

Through this project, the Banks Group was planning to dig up approximately 800,000 tonnes of coal and 400,000 tonnes of fireclay at the Dewley Hill site near Throckley, around 7 miles to the west of Newcastle upon Tyne.

The firm, which has been bringing what are understood to be the final applications for opencast mining in the UK at former North-East coalfields, has this year seen its proposals for a major project at Druridge Bay thrown out by Whitehall, as well as plans to enlarge an ongoing surface mine project in County Durham rejected by county councillors.

It insists that the fossil fuel remains key to ongoing national infrastructure work, including domestic steel production, and that the Throckley scheme will bring much-needed investment to the region, besides protecting a number of industry jobs.

However, this first claim has been disputed by environmental groups fighting the application and Banks’ wider plans to resurrect opencast mining in the region.

Ahead of the decision, Anne Harris from the Coal Action Network said: “The coal from this site is not suitable to be used as an ingredient in steel making, this type of coal is predominantly burnt in power stations to create electricity. In 2019 only 2.8% of the UK’s electricity came from coal.

“This year coal use is expected to be significantly lower after multiple long coal free spells on the National Grid. Coal consumption is one of the main drivers of climate change, we must act now to stop using coal or expect to see a worsening climate situation.”

Organisations like hers have joined forces with Throckley residents to mount an energetic campaign against the mining proposals, in a bid to hold the local authority to its word on climate breakdown, with Newcastle City Council having declared a climate emergency last year.

One campaigning resident of the former colliery village, Jos Forester-Melville, described the prospective mine as an “unforgivable smear”, adding that “the only answer on 18th December should be that Newcastle City Council refuse planning permission and that opencast is a thing of the past!”.

Jude Campbell, another Throckley resident active in the Defend Dewley Hill campaign group, also argued: “We need green space for the physical and mental health of our community especially in these times of pandemic. Clean air is essential, particularly when studies have linked poor air quality to the spread of Covid with poorer outcomes.”

Northumberland Wildlife Trust has raised concerns that – aside from the threat it says a new surface mine would pose to yellowhammer, skylark and lapwing bird species in the area – the opencast project may contaminate Dewley and Ouseburn’s waterways. The Trust cut ties with Banks as corporate sponsors last year, as it sought to make a clean break with coal in the area.

Earlier this year, a £6 million clean-up operation began some 40 miles away at the South Tyne waterway, the Nent – thought to be England’s second-most metal-polluted rivers – with flood water there found to contain high levels of toxic cadmium, lead, silver and zinc from a former mine in nearby Alston.

Leicestershire brickworks firm, Ibstock, which has made the joint application to dig up the Dewley Hill site with Banks, warned this week that rejection of the plans would deal its business a “devastating blow”.

Meanwhile, Jeannie Raine, Banks’ community relations manager, argued ahead of this week’s decision that refusal would represent an “offshoring [of] our economic and environmental responsibilities” and up the UK’s reliance on coal imports in the short term.

“There is currently no coal-free alternative for making raw steel at scale in the UK, with the use of hydrogen to make raw steel being at least ten years away,” she said.

“Indeed, the first fossil-free steel pilot plant won’t even be in operation until 2025 at the earliest, which is well after mining operations at Dewley Hill will have finished.“In the interim, UK industry will become totally reliant on coal imports without permission for new short-term mines like Dewley Hill being granted.”

Although Durham North West MP and ‘Red Wall’ Tory, Richard Holden, has led the calls for coal in Parliament, the Tory MP for Hexham, Guy Opperman, has blasted the Dewley Hill plans and urged councillors to reject the mining proposals.

This piece was updated after the council vote on Friday.