This, of course, is not the first time a Guido Fawkes reporter has reported, to steal a phrase favoured by some in the outgoing US administration, ‘alternative facts’. 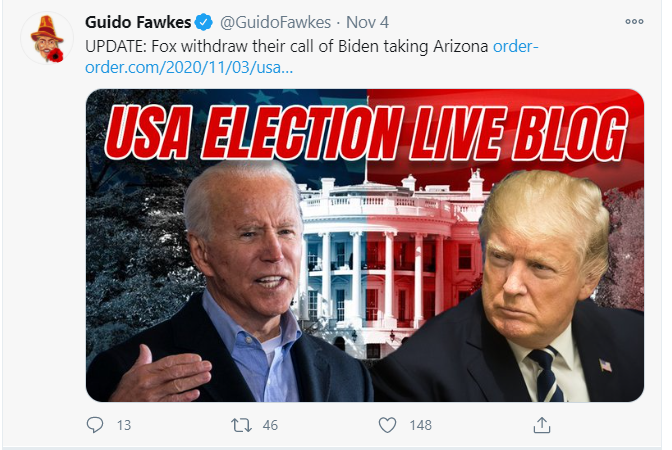 Right-wing blog Guido Fawkes has falsely claimed that Fox News retracted their call of Arizona for Joe Biden during this year’s drawn-out US election.

Certainly one of the more dramatic moments of an election that wasn’t short on them was when the right-wing cable network called the traditionally Republican state for the Democrats before any other outlet. It came as no small shock for viewers struggling with the concept that the network’s decision desk is independent from the Donald Trump-friendly talking heads, who often seem to talk directly to the current President through the screen.

400This caused backlash, both from the losing candidate currently residing in the White House and every QAnon supporting, MAGA hat wearing, multiple flag in bio Twitter troll. It is possible that the writer of that Guido Fawkes live election blog was sucked into the conspiracy corner of the Internet currently loudly proclaiming that Fox took the call back. 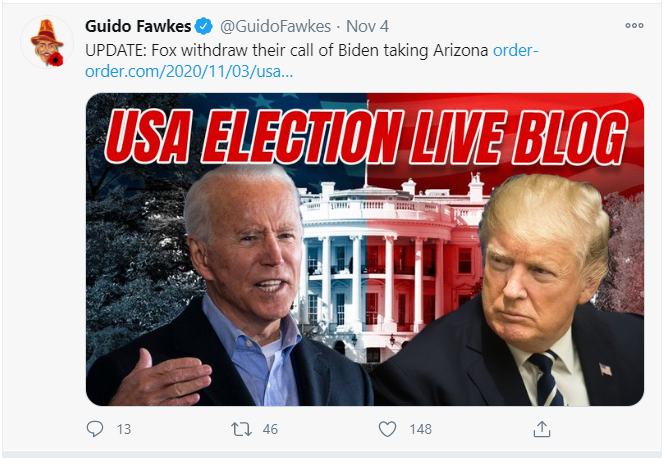 The only issue? This never happened, a fact easily verified by looking for Fox reporters disputing this as well as, er, clicking on the Fox News website live electoral map. Oops!

As of Monday morning a tweet claiming Fox retracted the call is up, as a picture of a Trump-brand sparkling wine posted the day after the election, captioned ‘too soon?’.  Talk about calling something prematurely…

This, of course, is not the first time a Guido Fawkes reporter has reported, to steal a phrase favoured by some in the outgoing US administration, ‘alternative facts’. In January the website was forced to admit they had ‘screwed up’ after claiming Rebecca Long-Bailey’s husband was the multi-millionaire director of a chemical company.

When the MP tweeted in amusement that she ‘married the wrong Steve Bailey’, the Guido Fawkes twitter account replied to her to apologise and admit they based their hard-hitting journalism on a Wikipedia article.

This gaffe came days after the outlet published a hit piece on a newly-elected Jewish Labour MP who defended the use of violence against fascists marching on the streets of Britain. The blog took serious objection to Warrington North MP Charlotte Nichols for saying fascist football hooligans performing Nazi salutes should ‘get their heads kicked in’.

And we can’t forget Guido briefly calling us ‘confused’ and a story ‘inaccurate’ after claiming that a scientific advisor criticizing the government’s Covid messaging was not a member of SAGE. In all fairness, they backtracked and deleted their tweets once corrected.

Guido Fawkes’ latest pet project is attacking Guardian columnist Owen Jones’ launch of a left-wing news channel. The article writer is accusing ‘the former princeling of the Labour left’ of creating a ‘class-based cash for access’ based seemingly primarily on the fact he’s started a Patreon to fund it.

“Access for the few, not the many comes surpsingly [sic] easy to socialists,” proclaims the author.

The columnist, probably used to living rent-free in some right-winger’s heads, wrote on his Facebook page: “Oh look, the first attempt at a hatchet job from the hard-right Guido Fawkes website on my new left-wing video channel 🎉

“What it doesn’t mention is everyone gets exactly the same, whatever they pay in, to fund content anyone can watch, letting me hire young media workers on a union wage during a massive recession.”

I for one am looking forward to finding out what Guido Fawkes will misrepresent next, deliberately or not.