The blog admitted they "screwed up". 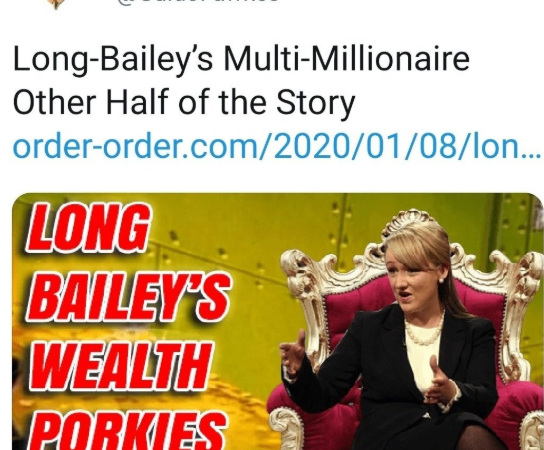 A right wing website called Guido Fawkes has admitted “we screwed up” after it claimed that Labour leadership contender Rebecca Long-Bailey was married to a multi-millionaire.

The website falsely claimed that Long-Bailey’s husband Steve was the multi-millionaire director of a chemical company.

Long-Bailey laughed off the anonymously-authored claim saying “clearly I married the wrong Steve Bailey…tripped up there didn’t I?”

Guido Fawkes later apologised to her on Twitter, saying: “We got the wrong Bailey. Two Steve Baileys working in the chemical industry. A lesson to us to never follow up leads from Wikipedia.”

The website does not list its authors for individual articles, so it’s not clear who made the mistake, but its two reporters are Tom Harwood and Christian Calgie. Harwood appears regularly on BBC politics programmes like Question Time.

Last week, Guido Fawkes labelled Nazi-saluting football supporters “Italian tourists” and said a Jewish Labour MP was wrong to say they should “get their heads kicked in”.

The article later changed “Italian tourists” to “Italian football fans” but did not take the story down and did not make a note that the correction had been made – as is conventional in the media.