Until very recently, they were taking £750k a year off the Chinese state. 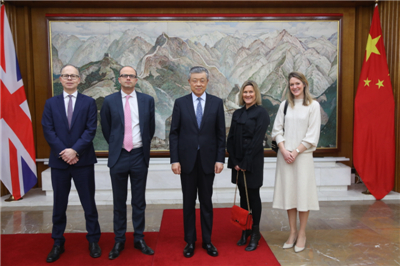 The Chinese Ambassador revealed today that UK newspapers are no longer willing to publish his opinion pieces.

“I tried my very best to contribute this article to a range of British newspapers,” said Liu Xiaoming at a Twitter press conference. “But unfortunately, no major newspaper liked to carry my article.” So he published the article in the South China Morning Post instead.

Not all the UK press was always so hostile. Between April 2018 and December 2019, The Telegraph published 20 comment pieces by Xiaoming – all of which are still online.

In these articles, Xiaoming praised China’s “style of international co-operation” and its focus on peace. He also threatened the US with economic pain and attacked “false accusations” made in the press.

As Left Foot Forward has been reporting since 2015, the Telegraph has a six-figure advertising deal with Chinese state media. The Telegraph was also particularly positive about the Chinese leader’s state visit to the UK in 2015.

According to Private Eye magazine, the Telegraph published its China Watch supplement in return for £750,000 a year. This deal has now ended and, according to the Eye, all the related articles have now been deleted from the Telegraph’s website.

In January 2019, Telegraph executives met with Xiaoming at the Chinese Embassy. According to the Embassy’s website, Sunday Telegraph editor Alistair Heath said the Telegraph was committed to “contribute to the understanding and cooperation between China and the UK”.

Speaking at his press conference today, Xiaoming said that the UK’s attitude to China “had changed” and he attacked the “arrogance” and “prejudice” of the British media.

Xiaoming defended Chinese policy in Xinjiang, where they have been accused of mass rape, forced sterilisation and forced labour inside ‘concentration camps’ for their muslim Uighur minority.

He said these camps were for de-radicalisation as part of the ‘War on Terror’. At the press conference, he played a compilation video of terrorist attacks overlayed with a dramatic action-movie-style soundtrack.

Another video, this time with upbeat music, featured camp inmates saying how the camps had been a positive experience on their lives.

Although they are not as frequent as in the Telegraph, Xiaoming has also published several comment pieces in the Guardian and at least one in The Times.