No 10 have been accused of putting lives at risk, as they plan to end the 'virtual Parliament' proceedings. 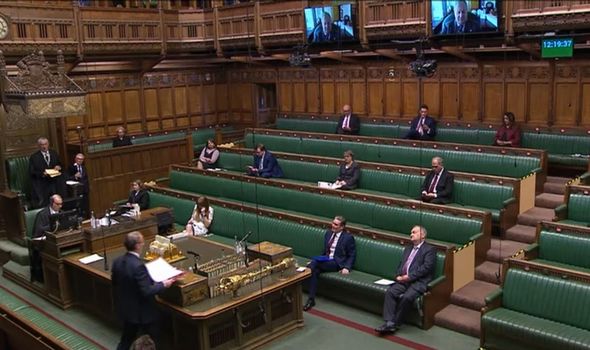 On Tuesday, Jacob Rees-Mogg announced that the Commons’ ‘virtual Parliament’ set-up – which allows MPs to meet and vote remotely over video-link – will be scrapped from the end of May, to encourage MPs to turn up.

When challenged on this at the Westminster lobby, the PM’s spokesman responded: “That’s a matter for them”.

Welsh figures have accused No 10 of a dismissive, cavalier response – with the Tories appearing like they’re trying to lock Welsh and Scottish MPs out of Parliament.

“The great irony is it’s the Conservative and Unionist party that is breaking up the UK. It first takes England in a different direction to the three other nations of the UK and now is trying to force Welsh, Scottish and Northern Irish MPs to travel, when our respective governments are advising against it on public health grounds.

“Yet again it shows Wales, Scotland and Northern Ireland are an afterthought. It’s not only putting MPs’ safety at risk, it is the House staff and the general public as well. In fact MPs’ travelling back and forth between Westminster and their constituencies may well become super-spreaders of Covid.

“Tory moves to stop virtual participation at Westminster would create an unnecessary risk of infection in our communities – and could effectively lock Scotland out of Parliament.

“The clear message in Scotland is ‘stay home to protect the NHS and save lives’. The option of virtual participation must remain so Scotland’s MPs can continue to hold the UK government to account and represent our constituents safely.

“Requiring MPs to travel back and forth hundreds of miles across the UK would disrespect Scotland’s more cautious approach and risk spreading the virus in communities across the UK.

“If the Tories want to take a riskier approach in England that is their right – but they must respect the different rules in each of the four nations by ensuring virtual participation continues.”

“It was only a few weeks ago that the Prime Minister almost died from this disease and now they want to cram us all back into Parliament. It is as short sighted as it is reckless.

“We can work from home as has been proved by the last few weeks, so we should. That is what the expert guidance says. Jacob Rees Mogg is not an expert in public health, and it is only when leading public health experts say it is safe will we vote to bring back physical proceedings. If the British Government tries to change things before that point they will be actively risking many lives, in the hope a few cheering Tories on the back benches might save their blushes in the Chamber.”

Asked again, the PM’s spokesman suggested ‘pairing arrangements’ – where MPs unable to vote are paired with an MP from the ‘other’ side – so they both abstain. However, MPs are now able to vote remotely – a process that could prove far more reliable than pairing (there have been cases of MPs breaking their abstention promises).

Pressed, the PM’s spokesman said: “It’s vital that Parliament can continue to scrutinise govt and legislate to support coronavirus response. Existing arrangements limit some of these functions.”

LFF comment: Wouldn’t locking Welsh and Scottish MPs out of democracy ‘limit scrutiny’? Something tells us these plans to end the virtual Parliament aren’t about boosting scrutiny at all: more like a ploy to appear as if politics is back to ‘business as usual’ – and ensure the reforms made in Parliament during this pandemic do not stick.

Virtual proceedings are just starting to find their feet – and are working pretty well. Are No 10 spooked by the threat of a good example?…