Westminster party leaders demand a 'Recovery UBI' to support the millions who 'slip through the cracks' of the government's income support schemes. 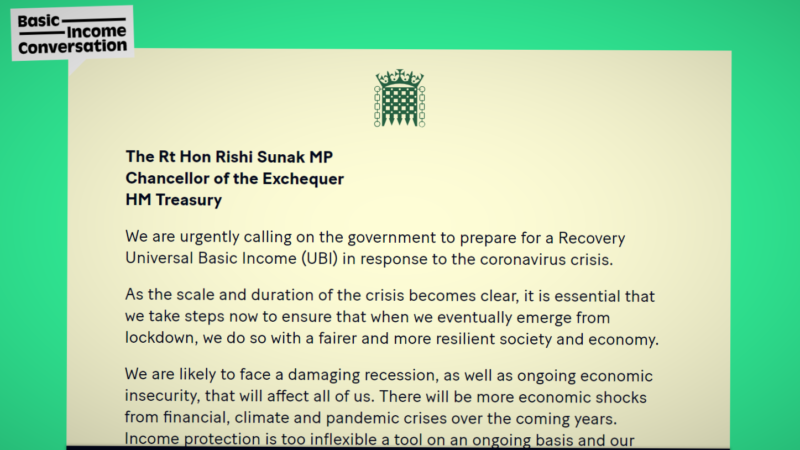 Over a hundred MPs and Peers across parties are calling on the government to urgently prepare a Universal Basic Income in response to the ongoing economic crisis caused by coronavirus.

The joint statement is signed by Westminster party leaders from seven parties across all four nations, with plans to raise this in the ‘virtual parliament’ throughout the week.

A Universal Basic Income or UBI is a government guarantee for each citizen to receive a minimum income. It is also called a citizen’s income, and the intention is to provide enough to cover the basic cost of living and give some financial security to everyone.

MPs and Peers see it as a way of providing an income floor that nobody falls below in this time of crisis but also act as a springboard to recovery. Last month, polling by Opinium found 84% of the public supported Universal Basic Income.

There may be millions of people not covered by the government’s employment support schemes. The self-employed scheme only covers those who were trading for the entirety of the last tax year, received most of their income in self-employment and received less than £50,000 in profits. Those who are paid in dividends, or who are the single-earner for the whole household, are likely to be hit.

The Institute for Fiscal Studies estimate that roughly 675,000 people will be ineligible for the government’s Self-Employed Income Support Scheme, which mirrors the 80% wage subsidy scheme for the employed.

The IFS says another 1.3 million people with some self-employment income are likely to be ineligible because they received less than half of their income from self-employment last year.

While the MPs and Peers have not yet suggested what the rate of a UBI should be, most UBI proposals are for an ‘income floor’ that is higher than the current Universal Credit rate (£409.85 a month for a single person over 25).

At a virtual Labour ‘huddle’ for lobby journalists on Wednesday, Keir Starmer’s spokesperson rebuffed calls for an ’emergency’ UBI: “We agree that the Covid crisis has confirmed the current social security system isn’t fit for purpose [but] constructing a new…system might not be possible during the pandemic.”

The campaign is backed by Basic Income Conversation, an initiative of the progressive think tank Compass.

“Through the Coronavirus millions lost their jobs before the furlough scheme could safeguard their livelihoods. Millions more are excluded from the support measures altogether. For others it’s impossible to survive on the relief they’ve been promised, as Universal Credit fails to stack up to people’s everyday bills.

“The number one priority is the 1.2 million people who don’t have bank accounts, so they can get proper assistance as soon as possible…I hope the government listens to our campaign and uses it as part of the recovery plan”

“Covid-19 has shone a very harsh light on the hardship suffered by millions of people in our country.  The virus hasn’t created this hardship, too many people didn’t have enough to live on before the pandemic.  But the situation has worsened as jobs are lost, people struggle to buy the basics and the use of foodbanks soars.

We will be living with this virus and its aftermath for a long time to come.  People need a social safety net and that should be a Universal Basic Income, not just to see us through this crisis but permanently.   Our social contract must be rewritten, with fairness at its heart.  A Universal Basic Income is the right place to start.”

“Covid-19 has shone a spotlight on the frayed, tattered and neglected ‘safety net’ of welfare provision. In the last sixty years we’ve had both the security of the post-war consensus safety net followed by a neoliberal, punitive variant.

“Now, as we edge further into the challenges of the 21st century – where automation, climate collapse and pandemics are already upon us – it’s time build a solid floor under everyone. That’s something only a Basic Income can give.”

Here is the letter published in the Financial Times today:

We are urgently calling on the government to prepare for a Recovery Universal Basic Income (UBI) in response to the coronavirus crisis.

As the scale and duration of the crisis becomes clear, it is essential that we take steps now to ensure that when we eventually emerge from lockdown, we do so with a fairer and more resilient society and economy.

We are likely to face a damaging recession, as well as ongoing economic insecurity, that will affect all of us. There will be more economic shocks from financial, climate and pandemic crises over the coming years. Income protection is too inflexible a tool on an ongoing basis and our current social security system is too cumbersome. Universal Credit is struggling to cope with the demands being placed upon it and many people are still falling through the cracks. The Job Retention Schemes are welcome but will be unsustainable in the long term.

As we likely exit lockdown in a non-uniform way at an uneven speed, the system simply won’t be able to keep up with people’s individual changes of circumstances. This is why we need to put in place plans for a Recovery Universal Basic Income – a regular cash payment to every individual.

The payments should be sufficient to provide economic security for people but we are not proposing the exact rate or how long it should last, these are decisions for the government. For now, we need to put in place the mechanism to be able to distribute cash to everyone. This should include an urgent and significant increase in Child Benefit. This will provide an income floor nobody falls below and a springboard to recovery.
84% of the public now support the introduction of a UBI and our cross-party group shows support from seven parties across all four nations.

We urgently call on the government to put in place the mechanisms for a Recovery UBI so it can be rolled out as quickly as possible. This will help transition our society and our economy into a sustained recovery, and will become the foundation for a future social security system that provides genuine security.