We handed out 15,000 flyers and could have done more with more resources. 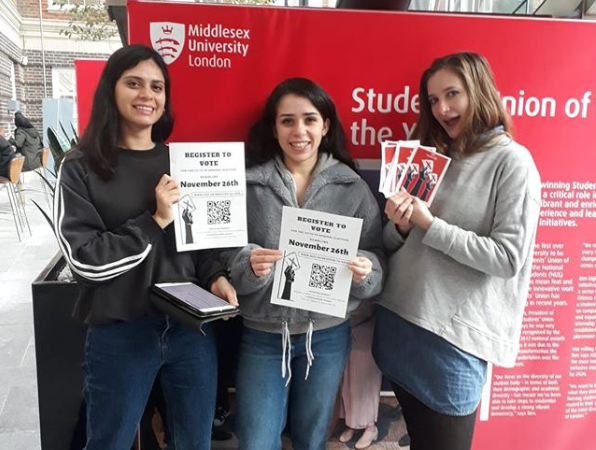 While many local parties and activists focussed on canvassing, 31-year old Londoner Katherine Hearst (on the right) went down a different track. Without any role in or help from the Labour Party itself, she launched a massive grassroots voter registration drive which sent dozens of activists off to marginal seats to encourage people to register to vote. She estimates they handed out around 15,000 flyers. After the election, Left Foot Forward spoke to her about the drive and the lessons she learned from it.

LFF: How did you get involved in voter registration?

Katherine: On a much smaller scale, I started in the 2017 election. I’m aware that canvassing is really useful but I found it unsatisfying and I didn’t think I was very good at it. Also,  I live in Kilburn, which was a marginal in 2017. So I’d come out of my house and there’d be floods of people canvassing so I thought ‘I don’t really see what i can contribute to this’. Also, I noticed a lot of people we were speaking to were older people and I was wondering how to engage youth voters.

What did you do next?

I ordered a load of voter registration flyers and sent them out to people who volunteered to act as distribution points.Then people started to post their events on the Facebook group, like ‘I’m handing out leaflets outside this college in Chingford’ and other people in the group would join them. There were drives outside of colleges, universities, mosques, churches, tube stations, sports centres, supermarkets, shopping centres – all sorts of different places.

What was the impact?

It’s hard to tell. I wasn’t collecting data, it was very informal and I was spending more time behind a laptop organising than actually doing the drives. From the feedback I’ve had though, I think we registered a lot of people. We started a lot of important discussions with young people, some of them weren’t aware there was an election on.

What was the most successful drive you organised?

We ran multiple drives in North Kensington on the day of the registration deadline. We used [the office of NGO] Migrants Organise as a base and coordinated groups of activists from there. It was an evening drive so we didn’t focus on students but we had flyering outside of sports halls, youth centres, supermarkets and literally walking down the main streets. We had one girl who went from Earls Court to Kensington Olympia and stopped in every kebab shop with a big placard saying ‘register to vote now’. She came across lots of people who weren’t registered – many of them were Commonwealth citizens who didn’t know they could vote. That’s a really big thing – pretty much every Commonwealth citizen I came across didn’t know they could vote.

This was mostly in London right?

Yeah, that was a capacity issue. I personally focussed on Kensington because I know it. We did extend beyond London…there was Sheffield, Southampton and Canterbury. I’m not entirely convinced how useful it is sending London activists out to communities that they’re alien to and personally I’d feel very uncomfortable going to somewhere like County Durham and going ‘hey I don’t know anything about your community but do you want to vote Labour?’

What did you make of the Labour Party’s voter registration efforts?

I don’t understand why they weren’t focussing more on voter registration. As far as I’m aware, there were a few adverts on Facebook but it has to extend beyond social media. Social media is really useful as an organising tool but it’s the same content being shared in a left-wing bubble. I don’t know if it reaches the people it needed to reach. That campaigning was limited and it should have been much more ambitious.

What would you do differently next time?

I’m not entirely convinced how effective flyering is in the long-term. I think it would have to take the form of workshops…being a bit more creative with it and working out how to keep people in a place and engaging them. Making them feel they’re leading the discussion is really, really important too. There’s a tendency (and I definitely do this) to lecture people. So I’d probably run talks and workshops in community hubs around the UK and create templates of workshops on a particular subject. I held a series of community screenings of Naomi Klein’s ‘This Changes Everything’ around the time of the first climate strike. The screening would be followed by a participant-led discussion about how the issues in the film related to those they were facing in their area. I think a similar format could work well on the subject of political participation.

That sounds like a huge job for a volunteer. Could the Labour Party pick it up?

It’s definitely a huge job. With the Labour Party though, the issue is being non-party political. Places are so scared of party campaigners. I’d like to be supported by the Labour Party but I don’t know how that would work in practice and I haven’t found them very flexible and supportive in that sense.

Have you thought about crowdfunding to cover the costs and the time of those organising these drives?

We did a bit of that. We crowdfunded to pay for the flyers and were given access to free printing by NGOs. Fundraising is a full-time job in itself but it’s something we should talk about. Paying people and having a core team would be great. Volunteer led campaigns are extremely effective and I’ve been taken aback by the numbers of people offering to help but the sheer amount of admin is unmanageable. Espeically if you’re just one person administering the Facebook page and overseeing everything.