"We've proven that workers can win for themselves and patients up and down the country," one of the workers at Imperial NHS Trust said. 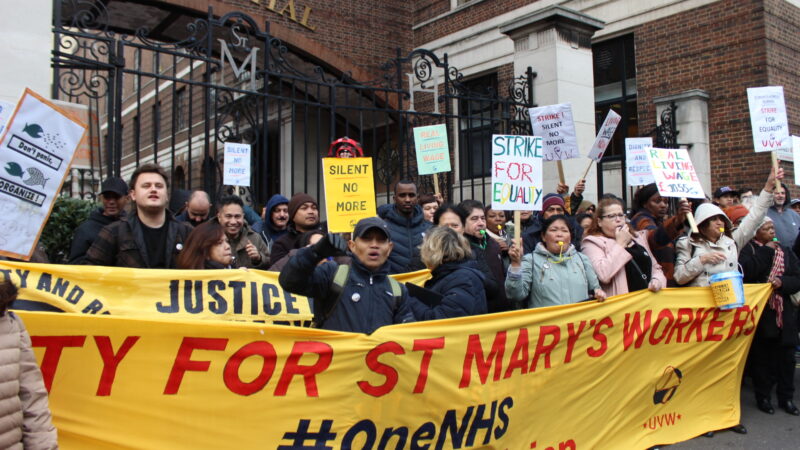 Imperial College Healthcare NHS Trust has been forced to bring in-house a thousand outsourced cleaners, caterers and porters, following a campaign of strike action by a migrant-led trade union.

The decision made by the Trust’s board on Wednesday brings an end to ‘decades of outsourcing to private contractors’, the United Voices of the World (UVW) union said.

All porters, cleaners and catering staff at Imperial College Healthcare NHS Trust are to receive NHS basic pay rates and sick leave and have access to the NHS pension scheme, with the Trust directly taking control of ‘hotel services’ on April 1st.

Several hundred workers, outsourced for over three decades to global giants such as Sodexo and ISS across five hospitals belonging to Imperial Trust, will now enjoy the same pay and terms and conditions as NHS staff.

The announcement marks the end of a three month long industrial dispute between the Trust and trade union United Voices of the World, which organises many migrant and precarious workers.

Petros Elia, the organiser of the strikes and UVW co-founder, said: “[This] marks a huge victory not just for these brave workers, but for all outsourced workers in the NHS. Our members were told they would never win this fight, but with the full backing of UVW and mass picketing, blockades and occupations they’ve won against all odds. This victory sets a historic precedent which we hope other workers will follow in demanding an end to outsourcing across the NHS.

“This is also a victory for patients. Study after study shows hospitals that outsource their ancillary staff have higher incidences of infections, including MRSA, and patient complaints are higher when it comes to hygiene and cleanliness. Cutting out profit hungry contractors will allow the Trust to put patient health and safety first.”

Imperial College Healthcare’s chief executive, Professor Tim Orchard, said: “We went into the hotel services contract re-tendering process knowing we wanted significant improvements in quality and for our cleaners, porters and catering staff to feel properly valued and part of our wider team. We thought we could achieve that through a new contract but it became apparent that our amended specification was not enough…

“I’m very grateful to the wide range of Trust staff who have worked incredibly hard to get to this point; to our hotel services staff and their trade union representatives for contributing to the review and sharing their expertise; and to all our staff who I know will want to play their full part in helping to implement these changes and realising the benefits for patients and for colleagues.”

“The Trust will now consult its staff and trade union partners on transferring approximately 1,000 hotel services staff to its employment from the current holder of its hotel services contract, Sodexo, under TUPE (Transfer of Undertakings (Protection of Employment)) Regulations.”

Here’s the letter from the Trust announcing the decision:

Loretta, one of the workers, said: “In November our strikes forced them [the Trust] to pay us the London Living Wage, it meant we got an extra several hundred pounds a month, but it wasn’t enough. We thought, “why shouldn’t we be paid like all other NHS workers?” and we kept on fighting for full equality.

“Now I won’t have to choose between paying my rent and protecting my health. Striking was not an easy thing to do, but we’ve proven that by sticking together, and by having the support of the amazing union UVW, that workers can win for themselves and patients up and down the country.”

In another ongoing battle, the union are campaigning for security guards at St. George’s University, outsourced to the multinational contractor Noonan, to be brought in-house.

As first reported by LFF, their first strike day in mid-January saw UVW’s head of legal, barrister Franck Magennis, arrested then released minutes later. The union are now suing the Met Police, with all proceeds in event of success going into the strike fund, according to UVW.