The Metropolitan Police arrested and then de-arrested the United Voices of the World's barrister. 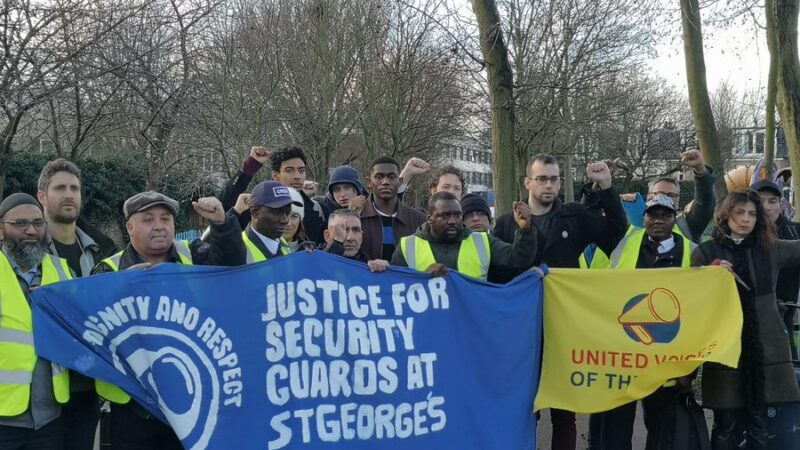 The Met police have been accused of heavy-handed efforts to break up peaceful picketing, following strike action at a London medical school on Monday morning.

Security guards at St. George’s (SGUL), University of London, are striking in protest at what their trade union has described as an “antiquated and discriminatory regime of outsourcing” at the prestigious medical university.

Attempting to move the picketers off NHS property – St George’s is a university hospital – the police cited the Criminal Justice and Immigration Act 2008, with the alleged crime stated as ‘causing a nuisance on NHS property’.

However, the United Voices of the World union, which represents the security guards, say the legislation says there is only a breach ‘without reasonable excuse’ – e.g. if the strike itself was illegal.

“Pickets have taken place at hospitals across the country in the past, with the legislation not commonly cited. Instead, the police turned up in three patrol officers, with six police officers to around 20 striking workers,” citing criminal legislation, a spokesperson for UVW told LFF.

Letters were reportedly handed out from NHS Estates services by the police service itself, with strikers told that if they didn’t leave the grounds within five minutes they would be arrested.

Today’s action was the first day in a wave of strike action. A spokesperson for the union told LFF: “There was no need for strike action to take place. St George’s has the capacity to employ these workers as in-house staff. But rather than negotiating the university called in the police.”

He said the police action was ‘completely disproportionate and a waste of police time.’

The largely BAME workforce, which is outsourced to outsourcing giant Noonan Services Group UK, is demanding that the workers be made direct employees of the university.

The 48-hour strike marks the first time that the workers have walked out in what is now a long-running dispute. A further 13 days of strikes are planned throughout January and February.

A spokesperson for the Met Police told LFF the protesters needed to move off NHS grounds: “Police were called to St George’s Hospital in Blackshaw Road shortly after 08.30hrs on Monday, 13 January to reports of anti-social behaviour. Officers attended. A group of protesters were found who were refusing to leave NHS premises.

“One of the protesters was arrested for a public order offence but was then de-arrested once the group of protesters had been moved off NHS premises.”

However, the union say the arrest of their head of legal is ‘frightening not only from a workers rights perspective but from the perspective of civil liberties and any citizens’ right not to be arbitrarily arrested’.

The workers, who receive only the statutory minimum in sick pay, annual leave allowance, maternity pay, paternity pay, and pension contributions, say they are overworked and feel discriminated against. One worker, who wished to remain anonymous, said:

“We are treated as being second class. They [St. George’s] say they treat us well, but we are overworked and have to come into work when we’re sick. The university couldn’t work without us, so why don’t they employ us?”

Petros Elia, UVW Rep and organiser of the strikes said: “St. George’s makes out these workers are treated well, but in reality, it chooses to pay them less than the lowest paid SGUL employee and forces them to come into work when ill. We have an internally commissioned report from SGUL showing that in-housing these workers would save the university £200k per year.

“It is indefensible that it continues to outsource them and can only be because they do not consider them worthy of being university employees. Other universities are moving away from this discriminatory and antiquated practice, and we hope that St. George’s will quickly in follow suit and avoid further disruptive strike action”.

“St George’s values the work of all its contractors and staff and is fully committed to providing the best possible working environment for all.

“The present dispute is between security staff and the University’s security services provider, Bidvest Noonan. We are in active conversation with Bidvest Noonan, our security contractor, with the aim of bringing this dispute to conclusion as swiftly as possible.

“With regards to one of the areas of dispute, in 2016 St George’s reviewed the possibility of bringing all its outsourced facility services in-house. The Strategy, Planning and Resourcing Committee, the University’s most senior executive committee at the time, carefully considered a number of factors and concluded that St George’s did not have the capacity and capability to bring its security provision in-house. There has been no change to this position.”

United Voices of the World (UVW) is a London-based trade union with 3000 members with approximately 200 joining every month, according to the union. The majority of its members work in low-paid jobs and are migrants predominantly from Latin America and the Caribbean — with a growing number from Asia and Africa.

In 2016, the union organised the largest cleaners strike in UK history and became the first trade union to force a UK university (the LSE) to bring the entirety of its outsourced cleaners in-house. UVW also represents workers in the legal sector, charity sector, cultural sector, architectural sector, and sex work sector— all of whom are fighting against low pay, unpaid work and overwork.