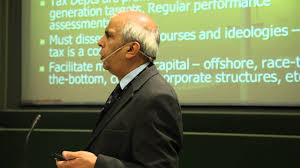 Prem Sikka is a Professor of Accounting and Finance at the University of Sheffield. Below, he argues that the Institute of Fiscal Studies criticisms of Labour’s manifesto are flawed.

The Labour Party has published its 2019 election manifesto together with full costing of its pledges.

The aim is to revive the economy, invest in infrastructure, improve people’s purchasing power and heal a nation increasingly marked by the ultra opulence at one end of the social spectrum and deepening poverty at the other.

Labour has estimated that its pledges would increase day-to-day spending by £82.9bn by the end of next parliament i.e. 2023-24, which is about 10% more than what is currently planned.

Labour’s costings also show that the expenditure would be financed by higher income tax contributions from the richest 5%, reversal of the Conservative cuts in corporation tax, a modest amount of financial transaction tax and reforms to taxation of dividends and capital gains, and measures to check tax avoidance.

In addition, Labour would borrow and invest to transform the economy by injecting £250bn over ten years in green industries to tackle the climate emergency. Another £150bn is to be invested over five years in the NHS, Schools, social care and housing, essentially restoring the investment removed by the Conservatives since 2010.

Debunked: The Institute for Fiscal Studies

Labour’s plan has drawn the ire of the right-wing press and neoliberal think-tanks like the Institute for Fiscal studies (IFS).

In opposing the reversal of the Conservative cuts in corporate tax, the IFS repeats the old unsubstantiated myths: “much of the burden will be passed on to companies’ employees through lower wages, and customers through higher prices …would reduce investment, and therefore productivity … “

Any Economics 101 student would be delighted to tell the IFS that corporate tax is not a factor of production. It is a distribution of the economic surplus and has no bearing on wages or prices.

Labour’s planned increase in the main rate of corporation tax from the present 19% to 26% by 2022-23 is lower than that currently charged by many developed economies, including Australia, Belgium, Canada, France, Germany, Japan, South Korea, New Zealand and the USA.

By opposing the increase in corporation tax, the IFS seems to be suggesting that individuals should bear an even higher cost of providing the social infrastructure or forego hard-won social rights whilst corporations can have a comparatively free-ride.

If there was a direct relationship between the rate of corporate tax and wages, then during that last decade UK wages should have risen by almost one-third, but have not.

The IFS is frightening consumers with the claims that higher corporation tax will lead to higher prices. Again, it provides no evidence to support its assertions

Prices of goods and services are dependent on elasticity of demand, competition, availability of substitute goods/services and much more. Starbucks, Caffe Nero,  water, energy and property  have been associated with tax avoidance.

Yet there is no evidence to show that this has resulted in lower prices of goods/services, water, gas, electricity or anything else.

Despite the era of low corporation tax, the total UK investment in productive assets has lagged behind its industrial competitors.

The IFS itself has noted that the UK “private sector investment is particularly weak” and that is not surprising as the government enforced austerity has eroded people’s purchasing power.

Low investment inevitably results in low productivity. The official estimates are that the output per hour worked in the UK is about 16% below the average for the rest of the G7 advanced economies.

The only way out of this log-jam is for the state to invest and Labour has promised to borrow and invest £400bn to stimulate the economy, something very feasible as interest rates are ultra low.

Investment would increase demand for corporate goods/services and generate jobs and tax revenues from additional wages and profits.

Increased borrowing draws IFS’s ire though it has been curiously silent about the increase in the Conservative government’s borrowing.

The money has been wasted on ideological experiments, tax cuts for corporations and the rich rather than investment in the economy.

.Overall, the IFS scaremongering about Labour’s plans is ideological and has no economic substance.