Over 1,400 people have now been arrested over London protests. 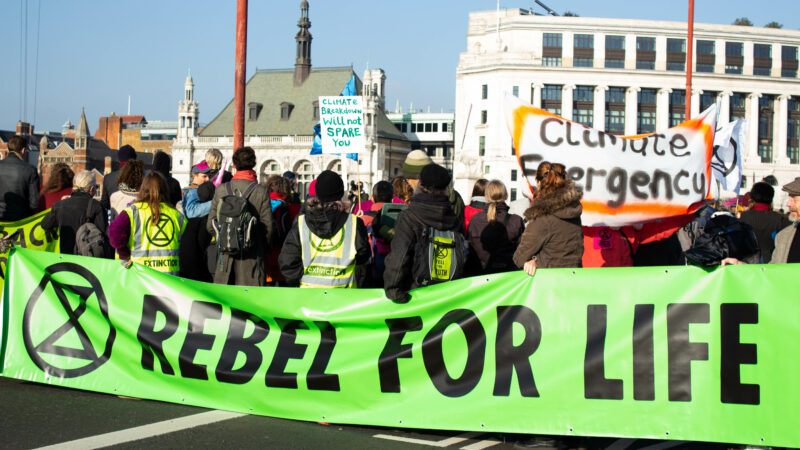 Ellie Chowns MEP, who represents the Green Party in the West Midlands constituency, was arrested at Trafalgar Square.

The detention came after police announced yesterday evening that “any assembly” linked to the Extinction Rebellion protest “must now cease”.

Speaking to Left Foot Forward, Green Party MEP Scott Ainslie, who accompanied Chowns to the site, said that she was arrested after they asked police what had changed to cause the police to clear the site of peaceful protestors.

Ainslie said: “She was arrested, taken to a station and released at 3am. They say they are looking into what action they can take. This is a farce. There was no legitimate authority to clear the square and certainly not to arrest someone for asking on what authority.”

Writing on Twitter this morning, Ellie Chowns said: “Last night I was arrested in Trafalgar Square while defending the right to peaceful public protest. That right is central to a functioning democracy.

“Yesterday, public protest was banned throughout our capital city. This is a completely unjustified and disproportionate measure.”

Protestors were notified yesterday that if they did not leave the Trafalgar Square site they would be liable for arrest and prosecution under Section 14 of the Public Order Act,.

Green Party MEP Molly Scott-Cato told LFF: “I’m shocked that my friend and colleague Ellie Chowns was arrested for refusing to accept the closure of Trafalgar Square to peaceful protest.

“It is not acceptable for public protest to be banned across the whole of our capital city. These are the actions of an authoritarian regime, not a flourishing democracy.”

This morning, Extinction Rebellion has targeted the Department for Transport, with co-founder Gail Bradbrook pictured on top of entrance door porch, hammering the glass window. Another protestor is also locked on to the building.

The move to shutdown the protests across London came as the number of arrests made in connection with the Extinction Rebellion protests yesterday hit 1,445.

UPDATE: The Green Party has released a statement saying that it stands in “solidarity” with Chowns. It added: “Limiting freedom of expression and peaceful protest […] is an erosion of the quality of our democracy.”