But the nature of organising in XR meant that 'autonomous' groups could go ahead and do it anyway. Cue public backlash. 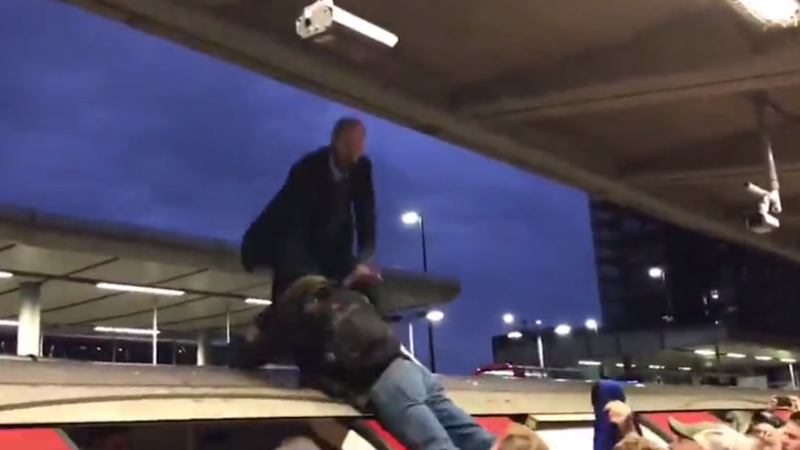 Leading Extinction Rebellion activists have spoken out against attempts to shut down parts of the London Underground on Thursday – which went ahead despite supporters apparently voting against it going ahead.

Left Foot Forward understands that Wednesday’s People’s Assembly – the main decision-making assembly of Extinction Rebellion – voted against shutting down the tube, but rogue activists went ahead with it anyway.

One XR source told LFF that the decision of the 1,500 or so at the illegal gathering in Trafalgar Square was ‘overwhelming’. Another source confirmed that the action had been ‘strongly opposed by a group decision’.

LFF can reveal that 73% of the 3754 XR activists who took part in a poll on encrypted messaging app Telegram voted against the tube action going ahead in all circumstances:

And a planned shutdown of Gatwick airport on Thursday was cancelled due to the reaction to the London Underground protest, LFF has learnt.

A statement published on Extinction Rebellion’s website on Tuesday failed to mention that the People’s Assembly had voted against the action going ahead. It said:

“On 17 October, several XR affinity groups (autonomous civil disobedience groups) are planning to nonviolently disrupt Tube services to highlight the Climate and Ecological Emergency…In any other circumstances these groups would never dream of disrupting the Tube but this is an emergency.

“As with a labour strike, economic disruption is key in forcing the Government to come to the table and negotiate our demands. XR creates mass disruption to highlight the emergency. Within the movement, there are affinity groups that are prepared to escalate their actions by targeting major infrastructure (e.g Government buildings, airports and public transport). The disruption caused by targeting such infrastructure will rapidly increase the longer it continues.”

Responses from activists on Twitter were overwhelmingly against the action going ahead. “This is a very stupid thing to do” noted one Green.

Many reports suggested that XR ‘apologised’ for the subsequent tube disruption on Thursday following widespread anger.

However, a statement from the group following the outrage merely expressed ‘regret’ and ‘sadness’ for the violence that took place, with several XR activists dragged from the top of a tube carriage at Canning Town.

The movement’s Political Strategy Group also voted against the tube shutdown action, according to member Rupert Read, who issued a statement:

“I deeply regret that the action on the tube went ahead this morning. XR Political Strategy group, to which I belong, advised strongly and unanimously against it, as did the vast majority of the movement.
Lessons must be learnt so that never again can the actions of a tiny number of ‘XR’ activists (sic) tarnish the entire movement. Once it was clear that this action was going ahead, XR should have disowned it, yesterday. But we didn’t (it seems) have a process for doing so. In future, the process for such disownment, where necessary, needs to be clear….

“The design of the action was questionable, its execution obviously flawed (one of those on the train at Canning kicked out in self-defence at those who were threatening to injure and possibly lynch him…Understandable – but not non-violent…XR is always non-violent)… and its timing (after yesterday’s wonderful gathering at Traf Sq to protest the Government’s authoritarianism, during the hugely significant court case we are bringing against that authoritarian withdrawal of the right to lawfully assemble across London) quite simply catastrophically stupid.

“I’m just grateful to those commuters who stopped the protesters who were being beaten up from being really badly injured. THEIR spirit is what has impressed me most from this whole sorry saga. And leaves one with some hope that the human future may yet not be doomed.

“The Political Strategy group is calling for a pause in XR’s October Rebellion, while we reflect on and atone for this most difficult moment in the movement’s history thus far… Watch this space…”

“I spoke out before the action and clearly continue to believe it was entirely misjudged. I’ll be pausing my involvement with XR to reflect on what’s happened and how best to push for greater accountability within the organisation before any other actions.”

British Transport Police said that eight people had been arrested during the tube action, according to The Times. Five people have been charged over the actions.

A ban is currently in place against all Extinction Rebellion protests in London, with the two week campaign due to end on Saturday.

XR have attempted to get the ban overturned, but a judge has rejected the call for an early hearing – meaning any success will be mostly symbolic.