So-called Taxpayers' Alliance report proposals would 'benefit the wealthiest most damage the environment' according to the IPPR. 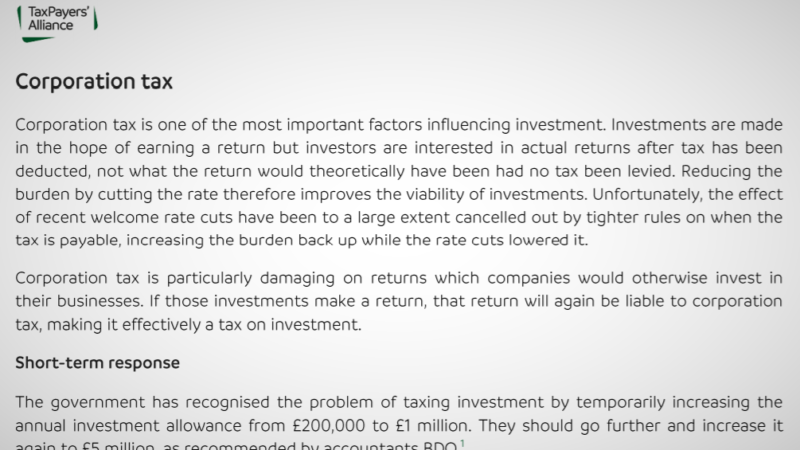 A new report by the secretively-funded Taxpayers’ Alliance (TPA) would be a disaster for social justice and the climate, progressives have warned.

The TPA’s report on a No Deal Brexit calls for drastic cuts to air passenger duty and huge extensions in tax relief on corporations.

Climate researchers DeSmog describe the TPA as part of the network of right wing think tanks which occupy 55 Tufton Street, alongside climate science denial think tanks such as The Global Warming Policy Foundation.

The organisation – known for proposing ‘right-wing‘ policies on tax – call for the ‘long term’ abolition of air passenger duty – at a time when the air travel is the world’s fastest growing source of greenhouse gases which cause climate change.

Globally the world’s 16,000 commercial jet aircraft generate more than 600 million tonnes of carbon dioxide, and the aviation industry is currently failing to meet even its own conservative reduction targets.

“The TPA are proposing tax cuts that would give £40bn in handouts to the wealthiest while failing to help the most vulnerable. This is a vision of a divided country, not a strengthened economy.

These proposals would disproportionately benefit the rich. Our figures show the 15 per cent income tax proposal would put far more cash in wealthy families’ pockets than those on low incomes. The evidence shows that cuts to stamp duty tend to push up prices, benefitting those selling expensive properties. And business rate cuts are less likely to reduce the price of a cup of coffee than they are to increase rents paid to landlords.

These proposals for long-term tax cuts are an ideological drive for a permanent-austerity, low tax economy, not an evidence-based rescue plan in the event of an economic shock.

Instead, we should be preparing ‘shovel-ready’ projects and getting ready to boost investment given that a recession could be around the corner – for a steady economy in the short-run and strong economy in the long-run.”

The IPPR say reducing the basic rate of income tax to 15% would benefit wealthier families more than low-income families as both a proportion of their income and in absolute terms.

That’s because earners above the higher-rate threshold would receive a tax cut on all of their income between £12.5k and £50k, whereas everyone else would receive the percentage cut on a lower amount of income, or not at all for those below the basic rate threshold. The distributional impact is demonstrated below:

The Chief Executive of the Committee on Climate Change, Chris Stark, has previously called on the Scottish Government to drop it’s proposals to reduce APD because of the impact that it would have in increasing emissions from aviation.

“This shows the real agenda of the Tories’ No Deal Brexit plans. Having spent nine years ripping apart our public services and social fabric, the Tories and their friends now want to take billions more out of our services and put them in the pockets of the rich.

“We must do everything in our power to stop a No Deal Brexit, which would put at risk our vital public services like the NHS.”

“In the face of a climate emergency, it’s completely foolish to cut and then abolish Air Passenger Duty (APD) which will lead to an increase in aviation emissions. It’s the rich who would benefit most from cuts to APD: just 15 per cent of the population take 70 per cent of flights and having an income over £115k or a second home are the strongest predictors of being a frequent flyer.

“When we need to be spending at least an additional £25 billion a year to tackle the climate and environmental crises, a tax cut which will disproportionately benefit the wealthy, is also deeply irresponsible.”

Last November the Guardian revealed that the TPA received at least $286,000 (£223,300) from US-based donors in the last five years – ‘including $100,000 from a billionaire-founded religious trust incorporated in the Bahamas’.

The organisation has also been campaigning against clean air zones across the UK, which have been described as ‘essential‘ in dealing with illegal pollution levels.

“This is typical of the TPA. Just as thousands take to the streets of our capital to highlight the government’s failure to act on the climate emergency, they produce this proposal to cause more environmental destruction.

“By advocating the abolition of air passenger duty, it is clear that the TPA completely fails to understand the dire situation facing our planet. We need a more progressive tax on flights – the biggest polluter in the transport sector. At present, 70% of flights are taken by 15% of our country’s population…

“We could use the revenue from the carbon tax to improve and expand our railway network and local transport services. That is real climate action.”