Green MEP Alexandra Phillips: The climate summit should launch a contest to reach zero carbon as fast as possible. 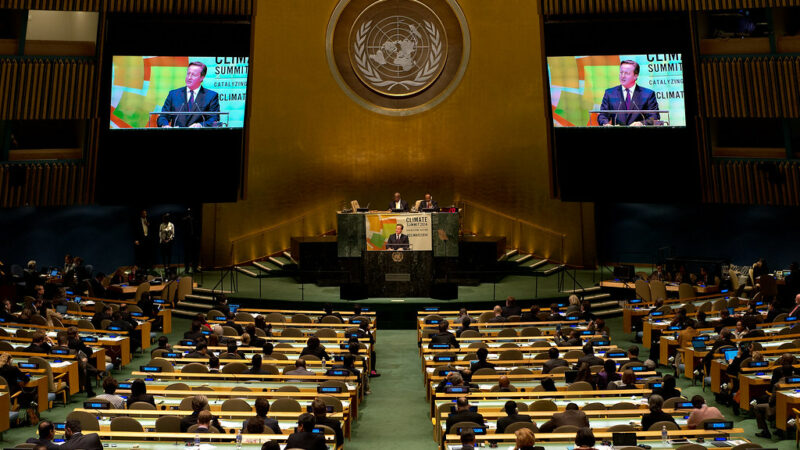 Next week, the starting gun will be fired for worldwide climate action.

After this week’s global climate strikes – instigated by Greta Thunburg and led by young people from across the world – the UN Secretary-General Antonio Guterres will be following their lead, hosting a summit of world leaders to ‘raise ambition and increase climate action’.

Mr Guterres is calling on leaders to show up with concrete, realistic plans to enhance their nationally determined contributions by 2020 – with the same aim as the current EU’s stance of reaching net zero emissions by 2050.

While it is certainly positive that the climate emergency is finally getting the global, political attention that it so desperately needs, there are still significant issues with the detail of what’s going to be discussed.

For starters, the EU’s current ‘net zero by 2050’ target is simply not ambitious enough. Carbon neutrality means eliminating carbon emissions altogether and it would have a huge environmental impact, but if we stick to the 2050 targets, it will be too little too late. The EU must commit to net zero by 2030 if we’re to stand any hope of slowing down the current rate of global warming which is projected to be at least 3 degrees by the turn of the century.

The UN summit has also been accused of succumbing to greenwashing. Fossil fuel executives from BP, Shell and Chevron are set to hold invite-only forums at the climate talks. These meetings won’t be open to activists or government representatives – stoking fears the summit will be a lobbying opportunity for these companies.

The same fossil fuel execs are due to meet on 22 September before presenting at the formal Oil Gas and Climate Initiative (the OGCI) forum the following day.

Taylor Billings, of the global campaign group Corporate Accountability, said the meeting and interaction with the summit were “nothing more than an opportunity for some of the world’s biggest polluters to greenwash”.

While there could be a case to be made for having these mass polluters at the table in order to discuss how we tackle climate change collectively, we cannot allow them to influence the dialogue. Burning fossil fuels is a massive contributor to global warming, with companies like BP ultimately profiting from the planet’s destruction.

We need governments to instruct these companies what they need to be doing – and what penalties they’ll face if they fail to do so – rather than asking them or consulting them on what they might like to do.

Much of the responsibility for tackling this climate crisis is left at the door of individuals. We’re told to stop flying, stop eating meat, stop using plastic. And whilst we really do need to reduce all of those lifestyle habits, it remains the case that for real, lasting, far-reaching change, governments must lead the way by holding the fossil fuel industry to account.

If we want genuine change, and a chance of a brighter future for our children, governments need to lead the way. Brexit would mean that we would be trying to forge that future alone, with our government working on its own to solve our country’s emissions crisis.

Even if our own government was on board with ambitious climate plans, and it’s not, we will inevitably make much smaller waves by acting as one tiny island; Europe as a bloc has to continue to commit to a pan-European effort.

Only when world leaders start to understand that, will we start to see more ambitious goals. I want to see countries – and entire continents – competing to see who can get to net zero carbon by 2030 first. We forget that the environment isn’t just talking about far-off glaciers and forests – it’s a socialist issue with grave ramifications for the real world and real people’s lives.

The hurricane in the Bahamas has killed hundreds of people, whilst this summer across Europe including here in the UK, we saw some of the hottest temperatures on record which contributed to the deaths of mainly elderly people. And poorer communities both here and abroad have to contend with higher levels of pollution than wealthier sectors of society. That’s why my work as a Green MEP is focused around a pan-European Green New Deal.

A Green New Deal is a set of policies created to tackle the climate crisis by putting social justice at the centre of everything. It will create secure, well-paid jobs as well as providing a huge amount of investment in renewable energies and energy efficiency measures.

Employment and job creation is absolutely fundamental to fighting climate change; as a child of the 1980s, I’ve seen UK-based industries collapse with no safety net for skilled workers whose families have been working in the same areas for generations.

Entire communities have been destroyed as a result of Conservative governments brutally culling jobs and contracts, and not replacing them with new green industries.

A Green New Deal could undo some of that damage: revitalising areas of the UK that have been abandoned and let down by successive leaders. Investing in these jobs means investing in our future: we need more innovation, more jobs, more money going into clean and safe energy and efficient building, not less. These fossil fuel companies do not work for the good of the global population and cannot continue to monopolise our resources.

By putting jobs at the forefront of our environmental goals, we’re going to be able to start seriously working on social inequality, as well as taking people out of fuel poverty, while also tackling the already unfolding climate disaster.

The UN summit may show that the world is waking up to the realities of the climate emergency. But we have to make sure it’s not just an exercise in greenwashing.

For the UK, our best hope of instituting real change is by staying and acting within Europe and getting a Green New Deal, not just for our future, but for the future of our children.

Alexandra Phillips MEP, Green Party MEP for the South East Region of England and member of the Environment, Employment and Women’s Rights Committees in the European Parliament.