After empty commercial space was transformed into a non-profit cafe helping homeless people, could it prove a model for elsewhere? 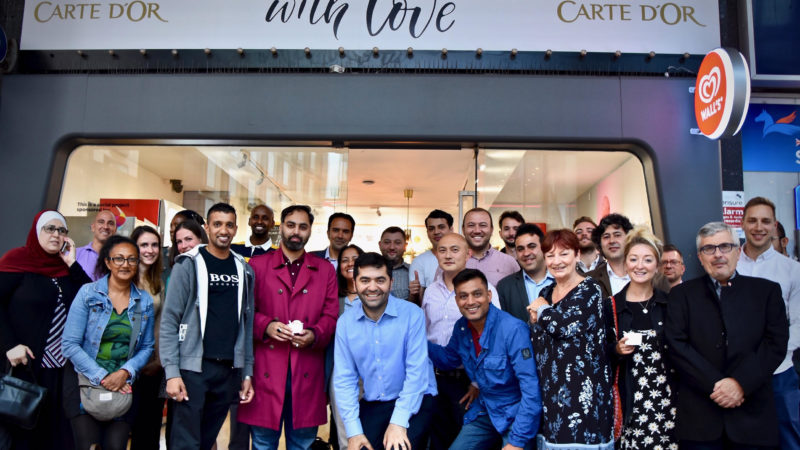 In the shadow of Waterloo station, Elizabeth House is a vast metal and concrete structure that was built in the 1840s. It honours the dead of the Great War, and it launched the first Eurostar service in the 1990s.

It has a significant social history. But today it risks being known for something ignoble – the rising tide of homelessness, with rough sleepers clustering around the station.

As a local councillor, this worries me. As a citizen, it angers me. As a local businessman, it puzzles me. That’s why I wanted to do something about it.

When I came to Britain in the 1990s, I waited tables day and night to make my way in a new country. With a mixture of hard work and good fortune I was able to work, save, build a business and buy a home.

But I am all too aware that not everyone enjoyed the good fortune I did more than 20 years ago when I walked into a job.

My experiences helped drive me politically and, now that I hold a local leadership role as mayor, I am keen to create the same opportunities for people in London struggling to get by.

Those people already on the breadline in the 2010s have had to cope with years of austerity driven by misplaced Tory dogma and the ideology of an ever-smaller state.

London is one of the most vibrant and enterprising cities in the world. Its mayor, Sadiq Khan, has been steadfast in his desire to keep the city open, tolerant and rewarding of hard work amid the political chaos of the last three years.

The scale of homelessness in the capital today, however, bears witness to the cruelty and incompetence of successive Tory governments led by out-of-touch leaders like David Cameron, Theresa May and the blustering Boris Johnson.

In Lambeth I am pleased to say we take a different approach. Last month I opened a coffee shop in an empty unit at Elizabeth House that aims to make a difference. ‘With Love’ is a community charitable enterprise with a focus on helping the homeless.

When commuters, tourists and shoppers stop at Waterloo they see ‘With Love’. When they buy our (great-tasting) morning coffee, they are encouraged to buy discounted food or a hot drink and donate it to someone who can’t afford it.

By building opportunities for giving into our daily routine, With Love is making giving easier at the same time as bringing people together, cutting the stigma around homelessness and creating a special type of enterprise. It has the simple aim of being good business that’s also good for the community it serves.

The community business has been made possible by generous supporters including HB Reavis – who have provided the premises rent-free – Ben & Jerry’s, who provided funds for refurbishment, and Coca-Cola, Just Eat, Cobra Beer and Chef Online who all made contributions.

We are now looking at how to provide training opportunities for unemployed Londoners following the countless studies which show a direct link between a lack of traditional education, unemployment, poverty and homelessness.

And for the staff we hire to work in With Love, we pay them the London Living Wage and ensure we put fairness at the top of the menu.

With Love will not end homelessness. We know we are just one part of a bigger solution which is being driven by community businesses across the capital. But, by providing food and support, we can strip out the ideology of austerity and make a real difference to the tired and the lonely.

Other Labour councillors across London are now looking at this model (based on sponsorship and using vacant space) to supplement their work tackling the challenges of homelessness.

It’s vital we win the next election and form a progressive Labour government. But projects like this also show what can be done outside of government through the power of community organising.

Ibrahim Dogus is Mayor of Lambeth, an entrepreneur and restaurateur. He is founder of the Centre for Turkey Studies and Centre for Kurdish Progress.

4 Responses to “Organising with love: How a new cafe shows the power of community action”