It is a hub of trading in destruction. 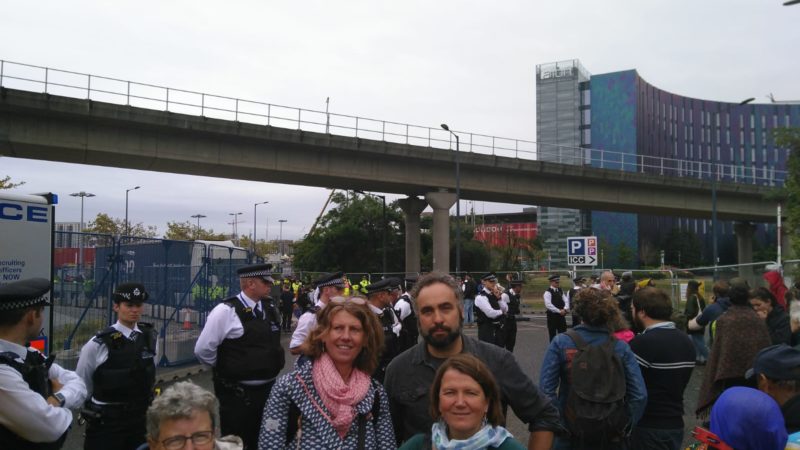 Today, the world’s biggest arms fair officially opens in London, a hub for trading in destruction that undermines my work as a Member of the European Parliament working on human rights.

I was there last week with my fellow Green MEPs to help disrupt the set-up of this vicious event, and to highlight that the arms trade is never a solution, only another form of oppression.

Defence and Security Equipment International (DSEI) is one of the world’s biggest arms fairs, with over 1,600 exhibitors.

When I arrived at the ExCeL centre in London, where it is held, military speedboats – quite possibly to be used to enforce hard borders against refugees – were just being towed in.

Police were everywhere along the road, while activists greeted the incoming weapons with as much noise and singing as possible.

Within a few minutes, someone had locked themselves to a truck that was trying to leave the site, effectively closing the road and blocking the set up for a few hours at least.

Why is this important? The weekend before I travelled to London, more than 100 people were killed when a Saudi-led airstrike hit a detention centre in Yemen.

The UK and other Western powers were possibly complicit in this, the United Nations said, due to their selling of arms to Saudi Arabia.

How will other countries take my work on human rights seriously, given that, as an MEP sent to the European Parliament by the UK, I represent a country that is thus complicit in war crimes such as these – a country that invites the perpetrators of such acts to do their business and buy their weapons here?

And it’s not just Saudi Arabia. Many countries on the UK Foreign Office’s “human rights priority” concern list are invited to this Arms Fair, included Bahrain, Egypt, Uzbekistan – all countries where freedom of association and of opinion have been violently curtailed by the authorities.

Brazil, too, is on the list of attendees, as the UK tries to boost arms exports to that country, despite growing international worry about the fascistic intentions of far-right President Jair Bolsonaro.

The Government may defend DSEI by saying that “security” is necessary, in a turbulent world, especially as conflict is only likely to increase under the pressure of climate change.

But in reality the promotion of arms trading only exacerbates conflict. It is those in power who want to buy arms, and their aim is invariably to secure their own advantage while continuing to oppress those who are powerless and disadvantaged.

The way to solve the problems in our world is not through shoring up violent defences, but through working to break down those systems of oppression, to solve the injustices that give rise to deprivation, conflict and displacement of people, and through mutual learning.

The spirit of resistance among the Stop the Arms Fair protestors was also a spirit of building anew.

On the little plot of land where activists camped there were impromptu gardens. They became the site of conversations about the dangers of colonialism and of nuclear power, the links between climate change and the arms trade and tactics for how to change the system.

Along with my fellow Green MEPs I spoke about the work the European Parliament has been doing to vote for a Europe-wide embargo on arms sales to Saudi Arabia.

Europe is far from perfect, but I fear that if we leave the European Union we will lose that voice of conscience that the European Parliament has been.

What is vital is that we as MEPs continue to stand in solidarity with those who are calling out the truth about what the arms fair is, and the injustices that it facilitates.

As Green MEPs. we have written to the UK Trade Secretary Liz Truss calling on her to uphold the embargo on Saudi arms deals.

As the arms fair kicks off in London, it is more important than ever for the UK to take up a position on the right side, not the wrong side, of human rights abuses here and elsewhere.

Catherine Rowett is a Green MEP for the East of England