Scientists using new climate models say a bigger heat rise than expected is possible by the end of the century. 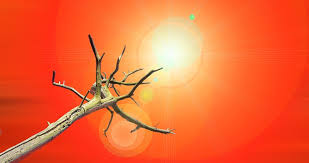 Greenhouse gases are raising the Earth’s temperature faster than previously thought, according to new climate models due to replace those used in current UN projections − meaning a bigger heat rise by 2100 than thought likely.

Separate models at two French research centres suggest that by then average global temperatures could have risen by 6.5 to 7.0°C above pre-industrial levels if carbon emissions continue at their present rate, the website phys.org reports.

Scientists − and most of the world’s governments − finalised the Paris Agreement on climate change in 2015, undertaking to keep the warming increase to a maximum of 2°C, and if possible to only 1.5°C.

Almost two years ago, a UN report deemed it “very likely” that global temperatures would reach 3°C by 2100, even if the Paris goals were fully implemented. But the French warning suggests a planet with double that predicted increase. And as the increase would be only an average, some parts of the world would be even more seriously affected.

“What we need to do to keep warming to safe levels is extremely simple. Global greenhouse gas emissions need to decline today rather than tomorrow, and global CO2 emissions should be brought to net zero”

“With our two models, we see that the scenario known as SSP1 2.6 − which normally allows us to stay under 2°C − doesn’t quite get us there,” Olivier Boucher, head of the Institute Pierre Simon Laplace climate modelling centre in Paris, told the French news agency AFP.

With barely one degree Celsius of warming so far, the world is already having to cope with more heat waves, droughts, floods and extreme weather, much of it made more destructive by rising seas.

Beyond Paris, a new generation of about 30 models known collectively as CMIP6 − including the two revealed by France − will underpin the sixth assessment report by the Intergovernmental Panel on Climate Change(IPCC): the full report is due in 2022.

These include increased supercomputing power and sharper representations of weather systems, natural and man-made particles, and how clouds evolve in a warming world.

“We have better models now,” said Dr Boucher. “They have better resolution, and they represent current climate trends more accurately.”

A core finding of the new models is that increased levels of CO2 in the atmosphere will warm the Earth’s surface more easily than earlier calculations had suggested. If confirmed, this higher “equilibrium climate sensitivity”, or ECS, means humanity’s carbon budget − our total emissions allowance − is likely to shrink.

The French models are among the first to be released, but others developed independently have come to the same unsettling conclusion, Dr Boucher said. “The most respected ones − from the United States, and Britain’s Met Office − also show a higher ECS” than the previous generation of models, he said.

“A higher ECS means a greater likelihood of reaching higher levels of global warming, even with deeper emissions cuts”, Boucher and two British scientists − Professor Stephen Belcher and Professor Rowan Sutton from the UK National Centre for Atmospheric Science − wrote in a blog earlier this year.

“Higher warming would allow less time to adapt and mean a greater likelihood of passing climate ‘tipping points’ such as thawing of permafrost, which would further accelerate warming.”

“Unfortunately, our global failure to implement meaningful action on climate change over recent decades has put us in a situation where what we need to do to keep warming to safe levels is extremely simple”, said Dr Rogelj.

Alex Kirby is a former BBC journalist and environment correspondent. He now works with universities, charities and international agencies to improve their media skills, and with journalists in the developing world keen to specialise in environmental reporting.

This story originally appeared in Climate News Network. It is republished here as part of Left Foot Forward”s partnership with Covering Climate Now, a global collaboration of more than 250 news outlets to strengthen coverage of the climate story.