85 days to go: The People's Vote campaign give an update on the Tories' car-crash Brexit push. 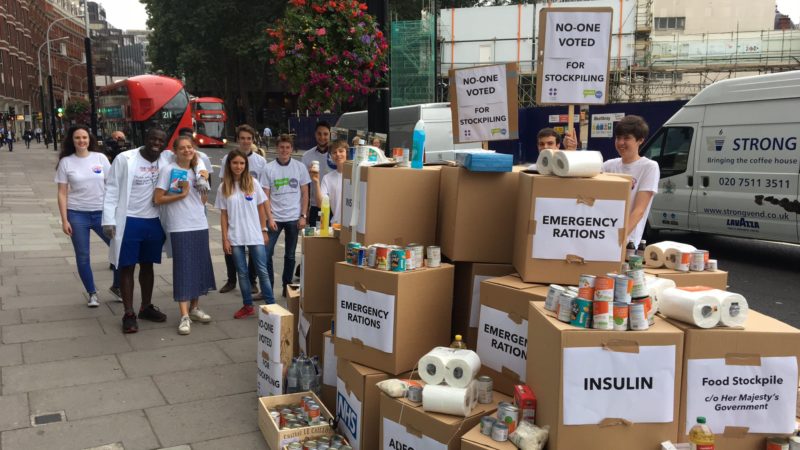 Michael Gove supported Theresa May through thick and thin, mostly thin. He said that Britain didn’t vote for No Deal. Now he is backing Boris Johnson’s destructive No Deal.

So, when he accuses the EU of intransigence over Brexit and says it is “wrong and sad” that they won’t talk to the UK government, one wonders who he is kidding.

Boris Johnson and his apparatchiks have consistently told EU leaders and negotiators that they won’t discuss Brexit unless the Irish backstop is deleted. He knows – and has always known – that the EU could never accept such a demand.

Irish prime minister Leo Varadkar has extended an open invite to Johnson to go to Dublin to discuss – with no pre-conditions – a way out of the crisis.

But Johnson doesn’t seem able to jump on a plane out of the UK, so Gove, who is now in charge of No Deal preparations, blames the EU. It is pitiful. He claims the EU refuses to talk, but it is this British government which refuses to seek a resolution that doesn’t cause maximum damage on both sides of the Channel.

As the threats to ignore Parliamentary votes prohibiting No Deal or even expressing no confidence in the government show, Boris Johnson’s administration is increasingly fixated on the idea of forcing No Deal on the country against the will of Parliament and the people. Expect to hear more absurd claims like those made by Gove over the coming weeks, as the Government seeks to lay the blame at the EU’s door.

Threat of food shortages after No Deal becoming clearer

The government’s own leaked reports on the potential No Deal threats earlier in the week talk about the threats of food and medicine shortages in the event of a destructive No Deal.

Businesses are being forced to spend a lot of money on stockpiling what is needed to carry on trading. In the case of Rolls-Royce, they have already spent £100million on preparing for No Deal, having learned what they need to do from the false start back in March.

Now we hear that Domino’s Pizzas is stockpiling tomato sauce from Portugal to ensure that customers can continue to watch the footie with their favourite meal.

While this will probably lead to increased prices for pizza lovers, will anyone be shocked when families around the country start hoarding and stockpiling food and household goods? If it is good practice for business, why wouldn’t it be for families? And isn’t that the sort of activity that causes shortages, especially at a time when the government is spending £138 million on propaganda that is likely to increase the fear factor behind No Deal?

The BBC reports this morning that the Food and Drink Federation are pressing the government to suspend competition law to enable firms to co-ordinate and direct supplies with each other in the event of No Deal, saying leaving in the Autumn is likely to be worse than it would have been in March.

The FDF’s chief operating officer Tim Rycroft said: “In the event of no-deal disruption, if the government wants the food supply chain to work together to tackle likely shortages – to decide where to prioritise shipments – they will have to provide cast-iron written reassurances that competition law will not be strictly applied to those discussions.”

With a shortage of warehouses in Autumn (compared to March), it will undoubtedly will lead to higher prices for consumers. The Wine and Spirit Trade Association’s report into Brexit preparations described No Deal as the “worst case scenario” and also pointed out that there is likely to be a warehouse shortage by October 31 with stocks being built up for Christmas.

No Deal would place UK at greater risk from terrorism, says police chief

The UK’s safety and security would suffer from No Deal and no amount of planning and preparation can erase the risk, Britain’s head of counter-terrorism has said.

Scotland Yard assistant commissioner Neil Basu told the Guardian that key crime-fighting tools would be lost and their replacements would not be as good. He warned that boosts to police and security service numbers were no longer enough to combat terrorism and that the UK would need to renegotiate security arrangements with the EU in a No Deal situation.

He said: “It would create an immediate risk that people could come to this country who were serious offenders, either wanted or still serial and serious offenders committing crimes in this country, and we would not know about it. It creates that risk. With my police leadership hat on there would still be deep concern. There would be some damage to our safety. I can’t put a scale on that.”

And he said that any potential police recruit who used the language that Boris Johnson had used about women wearing the burqa resembling “letterboxes” would not be allowed into the police.

It’s clear that Brexit must be put to the people. Now is a crucial time to get involved with the People’s Vote campaign.