Rewarding failure? Train fares have risen double the rate of wage growth over the past decade. 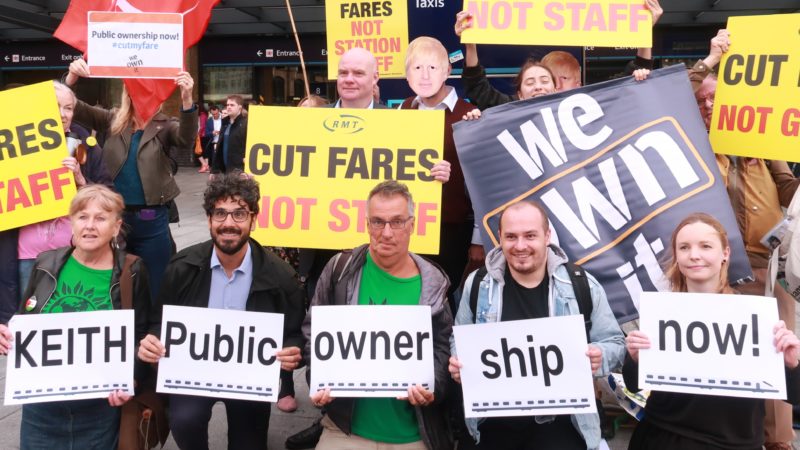 Protests are taking place across the country this week, as voters kick off against another round of rail fare rises.

Train fares are set to rise by 2.8% – despite franchise failures, delays, cancellations and continued fallout of last year’s timetable disaster.

The government is allowing the fare rise to go ahead – sparking protests at stations around the country organised by campaign group We Own It, including a coalition of campaigners, passengers, and unions at Kings Cross Station (pictured).

The fare rises – to take effect in January – will add more than £100 to many annual season tickets, and will mean that the overall cost of train travel has gone up by 46% since 2009. The figure is double the amount wages have gone up in that period, according to TUC analysis of ONS figures.

Campaigner Ellen Lees from We Own It said:

“It’s unacceptable that rail fares are going up yet again after the year we’ve had on the railways. Rail is already the most expensive way to travel around the country. This has to change.

“Public ownership of our railway could save us £1bn a year, to fund investment in new trains, electrification, or a drop in fares.”

Labour say some commuters will be paying over £3,000 more to travel to work than in 2010, with the highest increase projected to be on a Virgin Trains season ticket between Birmingham and London Euston – which will have risen by £3,188 since 2010 and now costs £11,205.

In Boris Johnson’s constituency the cost of an annual season ticket from West Drayton to London Paddington has risen by £583 since 2010.

“Every year, commuters are being asked to pay more money for bad train services.

“The government has sat back and allowed private train companies to cash in while people’s pay has been held back. Continuous fare rises undermine urgent action to tackle the climate emergency by pricing people off the railways.

“Labour will bring our railways into public ownership so they are run in the interests of passengers, not private profit.”

Campaigners are calling on Keith Williams, who is heading up the government’s review into the railways, to recommend public ownership in his White Paper in the autumn.

“Keith Williams has a chance to make a real, lasting change to our railway that will really deliver benefits for passengers – public ownership. He could cop out with incremental changes that don’t actually address the real problem, or he could be brave and commit to creating a railway that runs for people, not profit,” Lees said.

The protests come after new findings that private companies supplying trains to the railways paid out £1.2bn to shareholders between 2012 and 2018.