“The story of water privatisation is a story of failure. We’ve had thirty years of rising bills, shareholders and CEOs pocketing millions." 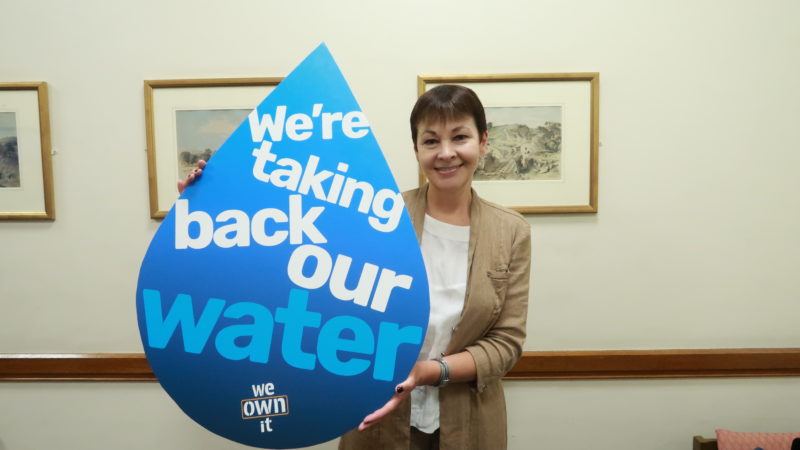 Anti-privatisation campaigners have been joined by MPs as they step up their campaign for England’s water to be brought into public ownership.

Last Saturday saw demonstrations around the country following news that Southern Water had been forced to pay £126m for spilling wastewater into the environment and had been deliberately misreporting its performance.

Today John McDonnell, Caroline Lucas and MPs across the Commons joined forces to launch the “People’s Plan for Water” – a crowdsourced manifesto of over 600 submissions on what publicly owned water could look like and what it could achieve.

The campaign is being coordinated by We Own It – the campaign for public ownership of public services, to mark thirty years since water was privatised by Margaret Thatcher’s government.

We Own It campaigns officer Ellen Lees said:

“The story of water privatisation is a story of failure. We’ve had thirty years of rising bills, shareholders and CEOs pocketing millions, and private companies failing to fix leaks in the system.

“The public are absolutely clear. 83% of us want to see water in public ownership. Now we’re speaking out and saying time’s up for private water companies that have ripped us off, polluted our rivers and allowed cash to flow straight from our bills into their shareholders’ bank accounts…it’s time for public ownership.”

The CEOs of private water companies have earnt £70 million in salary, bonuses, and other remuneration in the past six years, according to recent reports.

We Own It argues that bringing England’s water companies into public ownership would save £2.3 billion every year. They also claim that this could save people around £100 a year on bills.

6 Responses to “Time’s up: Campaigners and MPs step up demands for end to water privatisation”