Left Foot Forward catches up with Molly Scott Cato at the start of the Greens' spring conference. 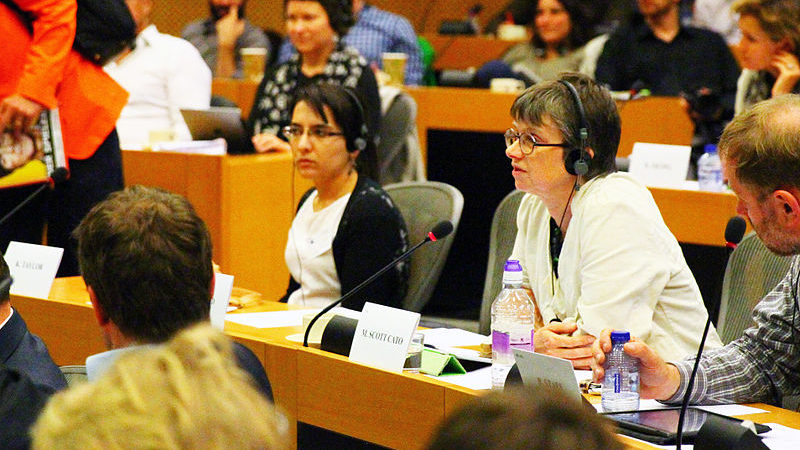 She may have helped take the Green vote from 11% to a walloping 18% in the European elections, but Molly Scott Cato is far from happy.

When I speak to the South West Green MEP on the first day of Green Party conference in Scarborough, she is frustrated by the failure of the political class to take the Greens seriously.

“I’m starting to feel immensely pissed off we don’t have the right amount of power. As a Green you get endlessly put down in the media – despite most of the journalists I speak to supporting us. Even when we do well in the elections, we don’t get the coverage.” Unlike the Brexit Party. Farage has ‘probably got a seat at the BBC with his name on’, she half-jokes.

It’s not just media coverage the Greens lack, but actual policy-changing sway – unlike in many other European countries. The Finnish Greens have just secured about 12% of the vote: “They will have an immense amount of influence on policy, with ministers in government – and they have the same amount of support as we do.”

Of course, it’s hard to gauge current Green support because of what Scott Cato calls ‘our shitty First Past the Post system’. Despite the Greens polling around 10% nationally right now, the party was squeezed between Labour and Farage’s Brexit Party in the Peterborough by-election, winning 3% of the vote. “Not only do we deserve more power, we need more power, due to the climate crisis.”

After the European elections the Greens hailed the death of the two party system in Britain. “Our job is to carry on breaking up the two party system. It’s not about us: it’s about people who routinely vote Green and never get representatives. I’m excited we might be getting to the end of that,” she says.

With seven MEPs and nearly 200 councillors, the party is coming out of the recent elections upbeat. Nonetheless, the uncertainties of a General Election is hanging over everyone’s heads. Can the Greens hold on to their support? “It depends when it comes. Anyone who looks at situation now knows we have to do something smart, and not just a ‘charge of the light brigade’.”

‘Doing something smart’ implies an electoral pact – something frequently raised during the European elections. “It was the Big Lie of the Lib Dems [that Greens rejected a pact]. An invitation was never sent.”

That gap between rhetoric and reality when it comes to parties working together shows the difficulties in overcoming tribalism. “Labour never get involved [in pacts]. It’s not easy to arrange.”

Remain parties almost formed a pact in Peterborough, backing anti-Brexit activist Femi Oluwole. But he stepped aside at the last minute, reportedly after pressure from Labour and People’s Vote campaigners.

So if it can’t be done in one seat, how can it be done nationally? Scott Cato is adamant that talks must be in good faith, and is scathing about the Lib Dems’ attitude to pacts: “Just talking about it is deceitful. Vince Cable should write to Jonathan [Bartley] and Sian [Berry], privately or publicly. They said they wanted it to happen – why don’t they make it happen?”

“Just talking about it is deceitful. Vince Cable should write to Jonathan [Bartley] and Sian [Berry], privately or publicly. They said they wanted it to happen – why don’t they make it happen?”

In 2017 the Lib Dems arguably exploited ‘the idea of a progressive alliance’ without acting on it. But local alliances have lived on, with considerable success in the London borough of Richmond upon Thames. And the growing prospect of no deal may focus minds.

“The dividing line is getting starker – it is now ‘no Brexit vs no deal’. Any sane politician at this point has to switch to stopping Brexit. The possibility of reopening the deal is obviously bollocks, and proroguing Parliament” – as Tory contender Dominic Raab has suggested – is a ‘fantasy,’ Scott Cato says.

One thing is certain: more fissures in the party system are coming: “Stopping Brexit will require Tories to put their country first and split their party.”

With talk of a General Election heating up, progressive parties will have to move quickly if they want to work together. There are democratic procedures that will have to be gone through.

In the meantime, the seven-strong group of Green MEPs have their work cut out. Scott Cato is part of the Europe-wide Green Group’s negotiating team on economic issues, pushing for a strong carbon tax. It is a policy that is likely to be blocked by Poland – but the Greens are bullish: “I don’t see why Poland should hold future generations of children to ransom.”

But this weekend, Greens will celebrate. “Greens work incredibly hard and rarely get rewarded [electorally]. And there’s a sense that people have grasped the urgency of climate change,” the MEP tells me. How that plays out in the next election is anyone’s guess.

5 Responses to “Green Party MEP: The choice is now no Brexit versus no deal #GPconf”