Revoking Article 50 is not only the democratic thing to do, it is the most progressive way to begin rebuilding our fractured polity. 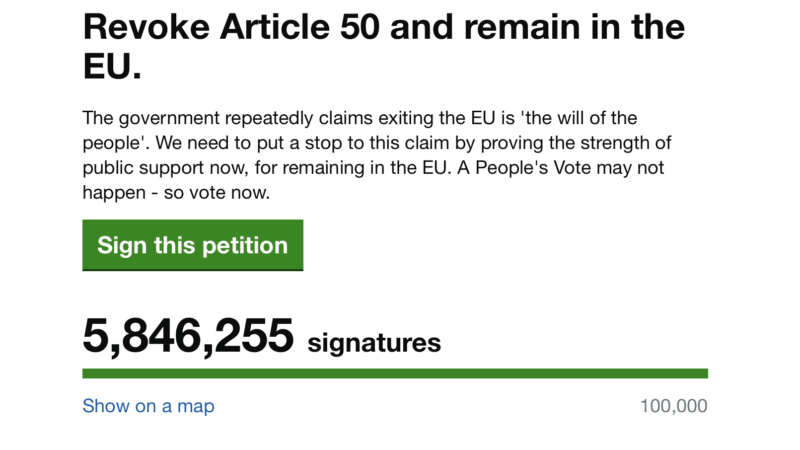 Between 300,000 and 400,000 people joined the People’s Vote March on Saturday (up to a million according to organisers) in one of the country’s largest demonstrations since the 2003 Iraq War protest.

As we marched to demand a halt to May’s disastrous EU divorce plans – an online petition to Revoke Article 50 was clocking up 2,000 signatures a minute and at the time of writing had exceeded 5.8 million supporters. #RevokeArticle50 is now comfortably the largest petition in British political history.

Nearly three years on from the referendum vote which has catapulted this disunited kingdom into its biggest crisis since the Second World War, we are no nearer to a decision on the Withdrawal Agreement. Nor has any alternative proposal succeeded in gaining a majority in the House of Commons. The most that parliament has been able to agree on is to kick the Brexit can temporarily down the road to 12 April or potentially 22 May if by some miracle Theresa May’s agreement is voted through this week or next.

As the Prime Minister declared by way of a response to the Labour Shadow Cabinet’s statement that a second referendum may now be necessary:

“We held a people’s vote, it was the referendum in 2016. It is now a matter of trust in politicians that we should deliver on the will of the British people.”

Like a hapless courier banging pointlessly and endlessly on the House of Commons front door, “Groundhog May” refuses to go away. But what if it turns out “the British people” have decided to cancel their delivery and the Prime Minister is too tin-eared to hear it?

We now have compelling evidence from no less an authority than Professor Sir John Curtice and the British Social Attitudes survey that this is precisely what has happened.

According to the most recent British Social Attitudes survey only 35% of respondents supported voting Leave compared to 55% opting for Remain. These findings corroborate polls such as that of the National Centre for Social Research (NatCen) which showed that 54% of voters who expressed a preference would now vote to stay in the EU compared to 46% who would support leaving. The cumulative evidence since the 2016 vote is enough in Prof. Curtice’s view “to raise doubts about whether, two and half years after the original ballot, leaving the EU necessarily continues to represent the view of a majority of the British public”.

This sea change in public attitudes towards Brexit is finally being reflected in parliament itself. Three former Conservative government ministers together with the Father of the House, Ken Clarke, have now come out of in favour of revocation, along with all SNP and Plaid Cymru MPs. While the Liberal Democrats have called for revocation to remain on the table. Hilary Benn, the Chair of the House of Commons Brexit Committee, and Labour’s Chief Whip, Nick Brown, both support revoking Article 50 in order to avoid a No Deal Brexit. Encouragingly Jeremy Corbyn has not ruled out revoking Article 50, although it is not apparently “his focus”.

Due to Theresa May’s cynical running down of the Article 50 clock, parliament is once again forced into the unenviable choice of her deal or no deal. But as both options have so far been comprehensively rejected by parliament it will take months if not years to come up with an alternative plan. All the indicative votes can do this week is signpost MPs to a slightly less contentious destination. It is also very likely that this chaotically divided parliament will not be the one that sees an eventual political declaration on the future of UK-EU trade to a definitive conclusion. While the deadlock continues, the temporary extension to Article 50 now increasingly feels like the prelude to No Deal.

In light of compelling evidence that the British electorate has changed its mind on Brexit, stopping the clock entirely -– with the possibility of restarting it if a second referendum decides on a tangible form of Brexit – and revoking Article 50 is not only the democratic thing to do, it is the most progressive way to begin the mammoth task of rebuilding our fractured polity.

Simon Parker is senior lecturer in politics at the University of York. He is writing in a personal capacity. He tweets here.

4 Responses to “Revoke is the new woke: The progressive case for stopping the clock on Brexit”