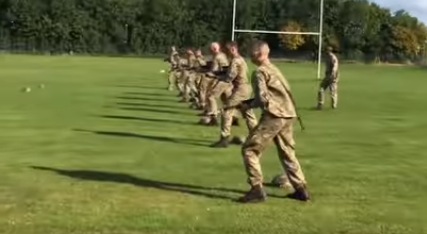 Military recruitment marketing is selling falsehoods to adolescents and exploiting the economic and social anxieties of young people while risking their well-being.

This was the resounding conclusion at the recent launch of Selling the Military, a report by military watchdog ForcesWatch and public health charity Medact.

By telling adolescents that only through the military can they ‘find where they belong’, ‘be the best’ and even ‘be made’ as a person, adverts cynically trade on the process of forming social and personal identity that is particular to the military’s 16 to 24 year old targets.

Promising a stable wage, skills transferable to civilian life, and a ‘way out’ of dead-end jobs and low prospects, recruitment marketing serves to justify the military’s strategic targeting of the young working class.

Particularly in a time of crippling austerity, anxiety and precarity, the military can meet real needs and provide genuine opportunities. Yet as paediatrician Dr Guddi Singh argued at the Selling the Military launch, these potential benefits come at a price.

The British military’s policy of deploying from 18 but recruiting from 16 means they are able to remove young people from mainstream education and put them in military training.

The education offer is in many ways inferior to civilian education with consequences for later careers. Studies show that working age veterans are twice as likely to be unemployed as working age non-veterans, and that many veterans struggle in civilian life due to a lack of transferable skills.

Under 18 recruits are more likely to develop mental health conditions both during and after service when compared to adult recruits, including an increased risk of suicide.

This could be explained by the strains of military training and culture on the adolescent brain; the channelling of the youngest recruits into the most dangerous roles; the likelihood of early entrants becoming early leavers; and the targeting of young people who due to adverse experiences in their childhood are particularly vulnerable to trauma related to military service, with the exacerbation of underlying issues.

Recently the Defence Select Committee said that mental health provision for personnel, veterans and their families is a ‘scandal’ and that they are being ‘completely failed.’

So, not only are young people being drawn in with misleading marketing, they are also then being failed in terms of long-term care.

Recruitment marketing has been seeking to reassure recruits that the military is a progressive, equal employer. Yet beside mental health risks, young recruits are faced with high levels of bullying and sexual harassment – especially for female and BAME personnel.

Earlier this year, human rights group Liberty launched their own Armed Forces Helpline due to concerns about sexual offending in the forces and because the military’s own justice system has proven itself to be systemically inadequate and incompetent in handling these crimes.

Military recruitment marketing also focuses on selling the promise of belonging. While this is enticing, it is incomplete and inaccurate.

The armed forces community, in particular veterans, face high levels of loneliness and isolation; with causes including a culture of self-reliance and pride, the loss of military friendships upon leaving the services, and struggles reintegrating into civilian life.

While recruitment marketing sells an exciting, fulfilling career in the military, levels of satisfaction and morale are shockingly low. Half of recruits say they don’t feel they had an accurate picture of services life before joining.

The Selling the Military report further argues that whether it is by shifting attention from the military to the debatable benefits it offers the individual, or by whitewashing aspects of the military’s role, marketing serves as propaganda to the wider public and morally exploits young people.

Unlike in civilian institutions where the well-being and interests of the young person are paramount, for the military its own interests must always come first.

One of the speakers at the Selling the Military launch was rising star of Scottish politics Rhiannon Spear – who as convenor of the SNP’s youth wing was instrumental in making raising the age of military recruitment to 18 party policy.

She called on political party members to push for the recommendations made in the report so that the well-being of young people comes first.

Not only do we need a raise in the minimum age of recruitment, but also better accountability, transparency and critical awareness around how the military sells itself to young people.

Rhianna Louise is a researcher and campaigner on human rights and ethics issues related to the British military and militarisation. She works for the UK’s military watchdog, ForcesWatch.

One Response to “Military recruiters exploit anxieties of teenagers”