Her comments on Muslims, the economy and young people have been controversial 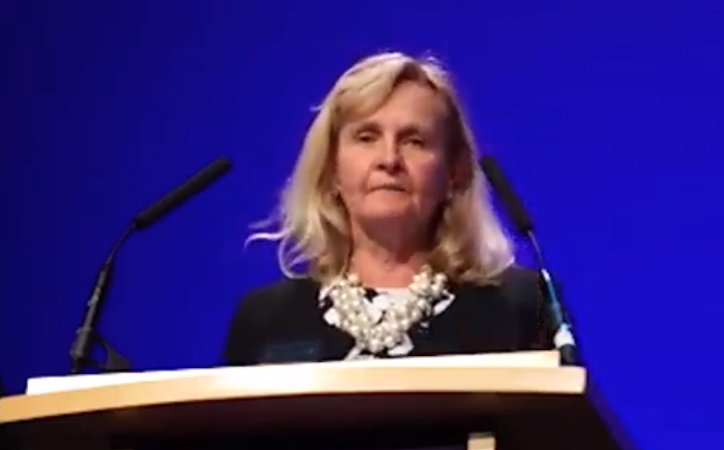 Although few have heard of them, most people in the UK will be represented in the European Parliament by a member of the Brexit Party.

They are a group of eight MEPs who were elected as UKIP members but broke away to form their own party.

Although their most famous member is Nigel Farage, their leader is Catherine Blaiklock.

Who is she? An Oxford-educated banker who joined UKIP in 2014 and became its economics spokesperson.

During the campaign, she took a photo of her black husband to a hustings to prove she wasn’t racist.

In December 2018, she was one of the UKIP figures, led by Farage, who left the party after its leader Gerard Batten appointed far-right activist Stephen Yaxley-Lennon (Tommy Robinson) as an adviser.

She claimed that she left because “Gerard Batten forgot that Ukip was set up as a libertarian party that did not discriminate on race, religion or sex”.

However, many of her statements written just months before this resignation have been called Islamophobic.

In September 2018, she wrote an article for the Salisbury Review complaining about closed-down pubs being turned into mosques. In it, she said:

I doubt that you would ever see a Burka and rarely a Hijab [in Norwich], but it seems that there are enough Muslims to build a large mosque.

You have to question where such a small community gets £1.5m of donations from. It takes a lot of Bangladeshi takeaways dishes at £1 profit a time to raise and save these sort of amounts.

In May 2018, she said she felt uncomfortable when a woman in a burka delivered her takeaway in Detroit.

Blaiklock, who is British, described the woman’s clothing as a provocative act and disrespectful to American culture.

In July 2018, in an article she wrote for the Tommy Robinson supporting website Politicalite. In it,she defended the chair of the Lewes Conservatives who had been suspended from the party for Islamophobic remarks.

Carola Godman Irvine was suspended for saying: “Radical so-called Islamists have for decades made it perfectly plain that they hate the indigenous British, our culture, values, freedom and Christian faith”

In the article in Irvine’s defence, Blaiklock wrote:

“There is also some truth in the statement that Muslim men were impregnating white British girls to create Muslim babies…Muslims, particularly in France, have been saying for a while that ‘Someday this will all be ours.’

Blaiklock has criticised British young people for objecting to statements like this, accusing them of being on the side of the Establishment instead of being revolutionaries. In a Politicalite article, she wrote:

“[Young people] seem to be thinking more about their cheap flights and booze cruises in Magaluf, than their long-term prospects.”

This article was written after Yiannopolous fell from favour on the far-right after appearing to endorse sex between young boys and older men.

On economics, Blaiklock’s views are to the right of the Conservative Party. In one post for Conservative Woman, she said “so-called austerity is nothing of the kind” and called for deeper cuts.

One post was titled “it’s an unequal world, get over it”

Another was called “Hungry? Let them eat spuds.” In this, she argued that instead of using food banks, people should eat boiled potatoes. She said:

A farm shop near me sells 20kg sacks of potatoes for £7. That works out at 28p per kg, which provides 750 calories, as well as enough protein, nutrients, vitamins and trace minerals to live on healthily. As is well known, the Irish, prior to the potato famine, survived on potatoes.

On healthcare, according to the Eastern Daily Press, she once argued that the UK health system should be cheaper, more like Nepal’s. She wrote:

““If you go into hospital in Nepal, you get a bed but no sheets, no food, and no care except medical care. The doctor sticks a prescription on the end of the bed and your relatives have to go and buy the drugs and bring them back for administering.”

“Your family bring in your food. That is how Nepal manages to spend £100 per year per head on healthcare. Obviously such a scheme is ‘unthinkable’ here, but why? Why shouldn’t people pay for food that they would obviously pay for if they were not in hospital?”

While Blaiklock technically leads the party, MEP Nigel Farage is the most powerful party figure.

He also claimed to have left UKIP because it is “obsessed” with Islam – but he has made many Islamophobic comments himself.

2 Responses to “Who is Brexit Party leader Catherine Blaiklock?”