From defending Trump's 'Muslim ban' to backing the hard-right group behind 'Londonistan' posters...is it time Farage resigned membership of the Farage Party? 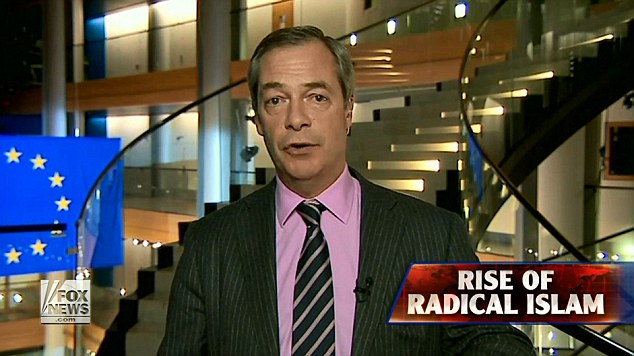 After over a decade in the party, Nigel Farage has ditched the UK Independence Party, apparently over its far-right shift under leader Gerrard Batten. Or at least, that’s the story most of the papers are lapping up.

Farage told LBC he did not recognise the party anymore, which is now ‘obsessed’ with Islam. That it was was turning a blind eye to extremist politics.

Which is funny, coming from Nigel Farage. He might want to resign from himself after being guilty of the same thing.

Here’s just some of the times he ‘obsessed’ over Islam.

1. When he raged against ‘immigration from Muslim countries’

In February last year, Farage said: “Only 20% of people want immigration from Muslim countries to continue…I simply cannot believe that you [MEPs] are blind to the fact that even Mrs Merkel wants a u-turn and now wants to send people back.”

The MEP said the EU was in for a ‘bigger shock’ than the Brexit vote due to a backlash against Muslim immigration.

2. When he defended Donald Trump over his anti-Muslim policies

You can tell the liberal mainstream media wish @realDonaldTrump had failed his medical. It’s because they hate true patriots who call out radical Islam and are tough on immigration. pic.twitter.com/1rbWEGIJF2

3. When he accused British Muslims of having ‘split loyalties’

In the wake of the Paris attacks, Farage said Muslims were ‘conflicted in their loyalties’ between the UK and their religion. He demanded a battle for ‘hearts and minds’ within the Muslim population and warned of ‘tremendous conflict’.

4. When he told Fox News – without evidence – that London is full of Muslim ‘gangs’

“There are gangs of men out saying to women in short dresses there shouldn’t be there; to people in having a drink that they shouldn’t be there,” Farage told riled-up Fox News viewers in June last year. Of course, there was no one challenging him to back up his claims.

He also used the slot as a chance to attack London Mayor Sadiq Khan and argue London is full of ‘wholly Muslim areas’.

5. When he endorsed the ‘far right’ Leave.EU campaign

In April this year, the Leave.EU campaign that Nigel Farage explicitly endorsed tweeted an image of ‘Londonistan’ – next to a picture of Sadiq Khan.

“As for the Muslim issue, no-one is allowed to talk about it and won’t for fear of being labelled racist by the likes of him [Wes Streeting],” a Leave.EU spokesperson told the BBC’s Newsbeat. They hit out in a still-live statement at the widely respected anti-Islamophobia monitoring group Tell MAMA.

In March this year, Leave.EU claimed Labour failed to deal with its antisemitism problem because Labour is “reliant” on the support of Muslims voters. The group posted on Twitter: “Is it any wonder that Labour can’t be bothered to deal with the disgusting antisemitism in their party when they are so reliant on the votes of Britain’s exploding Muslim population? It’s a question of maths for these people, not justice!”

Did Nigel Farage criticise his former pals? Fat chance: there wasn’t political capital to be made from it.

How concerned is Farage really about UKIP’s ‘new’ ‘obsession’ with Islam? Guardian journalist Carole Cadwalladr suggested on Twitter this could be the start of a bid to join the Conservative Party (as his friend and Leave.EU founder Arron Banks recently attempted to do):

Ah…so here it comes. The plot twist. Heaver is paid flunky of @arron_banks. Farage’s resignation has nothing to do with Yaxley-Lennon. With Farage, it’s only ever about Farage. This is clearing the way for what happens next… https://t.co/2t5snyCXlc

Banks was denied Tory membership. Softening up his rhetoric could help Farage’s bid out a lot…

Whatever the case, UKIP don’t appear to be missing him. A statement from Gerrard Batten, seen by Left Foot Forward, said: “I’m always sorry when a member leaves UKIP, however, I think that Nigel left the party in spirit after the Brexit referendum…I wish Nigel well in his media career. I doubt he will be asking me on his show.”

One Response to “UKIP resignation: Just some of the times Nigel Farage ‘obsessed’ over Islam”