Study after study shows climate campaigns need clear goals and targets in order to win. Will the new environmental campaign do that? 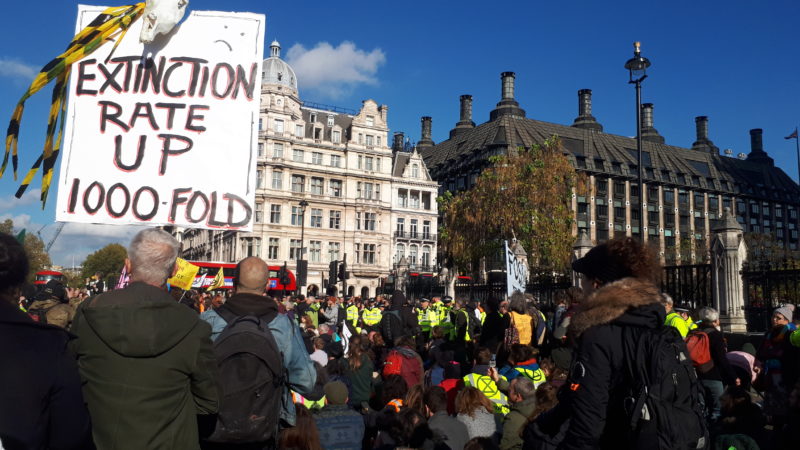 At the end of October, hundreds of people blocked the road outside Parliament to launch an ‘Extinction Rebellion’.

Their launch statement says: “We are in an ecological crisis caused by climate change, pollution and habitat destruction.” Its demands include that the government must “reduce carbon emissions in the UK to net zero by 2025” and “tell the truth about how deadly our situation is”.

The group are planning “an act of mass civil disobedience” near Parliament on the 17th November, part of a series of escalating non-violent direct actions in London. But who’s the target?

None of the speakers – nor the information on Extinction Rebellion’s website – explain how those who cause climate pollution will be influenced to take the right decisions.

While Caroline Lucas recently decried “the inability of governments to show leadership”, and their “grotesque abdication of responsibility”, campaign researchers Chris Rose and Jim Shultz both emphasise that we need to target those who have the ability to make the decisions we want.

At present, this is business much more than governments, which do not consider public opinion strong enough for them to prioritise climate change.

In YouGov’s monthly poll asking people to nominate the three “most important issues facing the country at this time”, health, immigration, and the economy are consistently the top issues besides Brexit.

“The environment” is always well behind – and during 2018 has been regarded as the eighth most important issue.

A large poll in eighteen European countries found that high proportions of people consider it either not at all likely, or not very likely that “enough governments will take action on climate change”.

Beyond the core of current activists, potential supporters are more likely to take actions focused on business rather than governments.

To attract and retain sufficient activists we should note the research showing that participation depends on confidence that the movement in question can “achieve tangible goals” – and needs your participation to do so.

Demanding emissions cuts by big business could inspire public hope and support. People understand that business can change soon when required. Companies need to compete for profits and investor confidence. There is huge scope for business to become more energy efficient, as outlined in my article in June.

In Why Civil Resistance Works, Erica Chenoweth and Maria Stephan found that the victorious movements they studied all fostered broad-based public sympathy. Achieving this in regard to climate change will not be easy. Most people prefer not to dwell on the topic, as outlined in my recent article.

And actions which inconvenience many people may generate more annoyance than support, unless they are widely understood to help remedy the problem. The excellent book This is an Uprising states that “the most important characteristic of a demand is…how well [it] serves to dramatize for the public the urgent need to remedy an injustice … [and] its capacity to resonate with the public and arouse broad-based sympathy.”

This all indicates the need both to identify susceptible target decision makers – and then pressurise them in ways which gain widespread public support.

Banks are one obvious target, as they can relatively promptly switch from supporting polluting companies to relatively harmless companies. But banks are also held in low-esteem by most people, who would be inclined to approve of actions which embarrass banks.

That kind of campaign could severely harm target banks’ reputation. They would know that their ability to recruit new customers would be weakened. Investments in dirty energy could become much less attractive.

Our impact could match the 2011 U.S. Bank Transfer Day, which inflicted what the American Bankers Association CEO called “a reputational kick in the chin”.

Other options we could explore would be to highlight the irresponsibility of manufacturers of exceptionally polluting cars. The industry knows how to produce more fuel-efficient, and electric, cars. Yet the most recent figures show that the emissions per mile of new cars are actually rising, partly as consumers are buying larger higher-performance cars.

We could spray-paint and occupy showrooms of companies such as Jaguar. As only a wealthy minority can afford Jaguars, these actions could be popular if we used suitable slogans: Jaguar gas-guzzlers cause climate chaos.

Campaign names and slogans must be tested in advance on a wide range of people, to ensure that they resonate with the public.

To succeed, we must remember Sun Tzu’s immortal words: “Strategy without tactics is the slowest route to victory. Tactics without strategy is the noise before defeat.”

Tim Root is co-ordinator of Muswell Hill & Hornsey Friends of the Earth. Tim’s work on climate campaigns has previously been published in several magazines, including The Ecologist.

See also: “There’s an ecocide going on and this government needs to be made responsible”